While the drilling industry was plowing ahead at full steam in 2008, everybody was frantic for growth. More people had to be hired and trained. More manufacturing facilities had to be built to increase capacity. More wells had to be drilled because commodity prices were too good to pass up.

But when the economy collapsed and everything came to a halt, people were left at a loss as to, “What now?”

For Scott Schmidt, president of the Hughes Christensen product line for Baker Hughes, the downturn was almost like a hit on the head with a bat.

Faced with significant declines in drilling activities in almost every drilling market – especially in the US and Canada, Gulf of Mexico and Russia – his organization has had to make tough choices in terms of laying off personnel and shutting down manufacturing facilities. At the same time, Mr Schmidt said, they know the importance of walking that fine line between short-term profits and long-term growth.

“If you manage everything by short-term profits, you’d probably hurt yourself in the long term,” he said. “You have to figure out a fine balance.”

Over the past year, his group has continued major infrastructure investments in areas like Argentina, Brazil, Saudi Arabia and Russia. They’ve continued college recruiting and hiring college interns. And they’ve continued to bring new technologies into the market.

“You’d think we’d be hunkering down and holding back new innovations until the market picks back up. We’re actually in the process of launching our Quantec Force and Vanguard drill bits, and the Gauge Pro XPR concentric reamer. … These are all technology-driven product lines that will help our customers drill faster and further and reduce their operating costs,” he said. “We’re pretty proud of that in this downturn.”

As far as recessions go, this one was a doozy – many are calling it the worst since the 1930s depression, in fact. And for natural gas drilling, the recession brought to head a severe gas oversupply problem that had been building well before the economy crashed.

The industry had approximately 1,600 rigs drilling for gas at this time last year, compared with about 700 now, Mr Schmidt said. You’d think that kind of decrease in rig count would have an effect on the supply side at some point. But so far, it hasn’t.

“We’re still injecting at rates as high as last year, even with the decline in activity. We injected 67 Bcf this week last year, and we did 66 Bcf this week,” Mr Schmidt pointed out in mid-September.

Moreover, he believes that there are a significant number of wells out there that have already been drilled but not yet produced. “We’re currently trying to get our hands on what that number is. It will be a determining factor going into next year … As soon as we start to see the price bump up, operators will start producing these wells first. That will be the first thing they spend their money on.”

He also pointed out that operators in the Gulf of Mexico who work the shallow-water jackup market are moving their cash to the Haynesville and Marcellus plays onshore. “They’re saying they can make the most money with the production level in those places… it’s better than offshore right now.

“We see the shallow water staying pretty light in terms of activity level next year. We only know of two rigs on long-term contract on the shelf. Visibility is difficult because no one seems to know their plans on the shelf,” he said.

Since the industry has only a relatively short history with shale gas wells, how their depletion will play out over the next few years is a great unknown.

Weather is another X factor. In mid-October, the Energy Information Agency reported that notably cooler temperatures in several areas of the United States was helping to boost heating demand. That could bode well for how much gas will be burned off this winter, yet it’s far from something we can count on.

“If there’s a normal winter, we’ll probably stay at this activity level and maybe up slightly next year. And at some point – whether it’s Q3 or Q4 next year or 2011 – we’ll pick back up. Most experts think we’ll be in the 1,200 to 1,300 rig range, up from 1,000 now. That would be a fairly good pickup and fairly healthy for the industry,” Mr Schmidt said.

On the oil side, things are looking much better than gas. In fact, nearly all the activity increases US land drillers are seeing are oil-driven. Mr Schmidt commented, “Companies will continue to look for oil projects. We might see another 50 to 100 rigs drilling for oil on US land.”

Outside the US, economies around the world appear to be stabilizing and may even be on the upward trend – good news for oil demand, of course.

“Right now, most of the experts and Baker generally agree that oil will probably be between $60 and $80 next year. … If it goes below $60, you’ll see a drop-off in activity,” he said. “There’s going to be some fluctuation, no doubt about it. But if it stays between $60 and $80, I think you’ll see the investments that are needed. Don’t forget that supply and demand curves are still pretty tight, so it’s going to require some drilling.”

Northwest Europe: Chance of recovery may depend on small operators’ access to funding 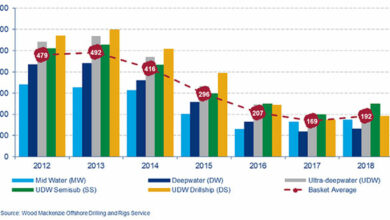 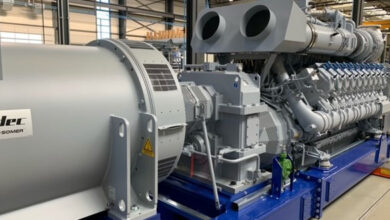