Tight supplies in jackup markets around the world have pushed contractor backlogs to near-historical highs, which is providing marketing flexibility and pricing support, particularly in the US Gulf of Mexico (GOM), John Rynd, Hercules Offshore president and CEO, said at an Offshore Energy Center luncheon in Houston on 31 July. Mr Rynd noted that although there is still room for dayrates to grow, the estimated 200 days of backlog at Hercules has had an especially positive impact on the company. “The real peak for us is this backlog. We have visibility now, with about a third of our fleet already contracted well into 2014.”

Since the early 2000s, the US GOM jackup supply has shrunk from approximately 150 units to around 40 now. “Here we are today with basically no excess capacity in the Gulf of Mexico. There’s currently 37 jackups capable of drilling wells deeper than 10,000 ft … and there’s 36 contracted. It’s changed dramatically,” Mr Rynd said, adding that industry utilization of jackups has been nearly full since Q4 2011.

He explained that over the past 12 years, 38 GOM jackups have either been scrapped, lost in hurricanes or converted for alternate uses. On top of that, a net 51 jackups have mobilized out of the region. This exodus has been driven by multiple business considerations, including the availability of longer-term contracts elsewhere compared with the GOM’s historically well-to-well environment. “Post Katrina and Rita, another significant driver was insurance cost after those storms and even really access to insurance,” he said.

Further, Mr Rynd said he foresees no significant growth in the US GOM jackup supply, at least through 2014, primarily because operators are looking for jackups in other markets as well. A total of 392 jackups are currently working outside the US GOM, he said. “We’re at an all-time peak, about 60 rigs above the previous peak in mid-2008. Middle East, Southeast Asia, West Africa and Mexico are all above their previous peak… Every major jackup region in the world is shy of jackups.”

This demand is unlikely to let up soon, particularly with aggressive expansion plans under way at some of the world’s biggest consumers of jackups, like Saudi Aramco, Pemex and ONGC. International markets also continue to provide better economics than the US GOM, Mr Rynd explained. For example, in Southeast Asia the average contract term for jackups is approximately 15 months and the average dayrate is $130,000, while in the US GOM those metrics are six months and $95,000, respectively.

Still, Mr Rynd stressed, the jackup business in the US Gulf is on an upward trend, supported in particular by operators shifting their focus from natural gas to oil/liquids-rich projects. “Almost consistently about 80% of our jackups over the last 18 months have been drilling for oil and liquids,” he said. A resurgence of private equity on the GOM shelf also has expanded the customer base. “We’ve got 35 customers today, we had 23 in 2009,” he said.

Hercules also continues to take steps to improve the profile of its global fleet. The formation of Discovery Offshore in January 2011 was a milestone, Mr Rynd said, and two high-specification, harsh-environment, high-temperature jackups are under construction at Keppel FELS in Singapore with deliveries scheduled for this year. Further, Hercules has sold its US liftboats and inland barges to focus on higher-growth assets. “The Discovery Offshore acquisition moves us in the right direction: renewing the fleet, high-capacity units that can work anywhere in the world, expanding services to our key clients, selling the domestic liftboat and inland barge businesses… The business is solid on all fronts.”

2D seismic survey offshore Croatia to lead into 2014 licensing round 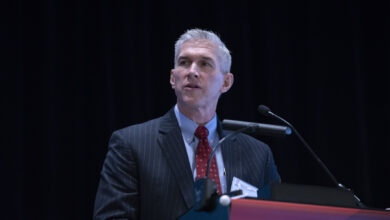