In 2007, in order to meet client demands for high-specification, fast-moving rigs with improved safety and minimal environmental impact, Ensign Energy Services decided to deploy two Automated Drilling Rigs (ADR) from Canada to Australia. These environmentally friendly rigs have small footprints and offer a safer working environment for personnel through automation. Their trailerised design saves time when moving between locations and minimises nonproductive time.

In order to move the rigs into Australia, Ensign embarked on a rigorous cleaning campaign to ensure quarantine requirements were met. Rig #48 was destined for Barrow Island, a Class A Environmental Reserve requiring special quarantine measures.

Ensign and the client, Chevron, utilised the services of Toll, a sub-contract company approved by the Western Australian government that ensured quarantine measures were policed and strictly maintained. Ensign was aware of requirements of the Australian Quarantine Inspection Service (AQIS) to import rigs to Australia. However, acting on advice that Toll inspected to a higher standard for Barrow Island, an AQIS inspector was not engaged to inspect Rig #48 equipment in Canada.

Subsequently, Ensign was advised that due to a bureaucratic turf war, AQIS would not accept the Toll inspection even though Toll had forwarded detailed reports and photographs of the cleaning process to AQIS. As a result of AQIS not accepting Toll’s inspection, Rig #48 had to be diverted from its direct shipping route to Dampier to be offloaded in Darwin for AQIS inspection. This diversion cost Ensign approximately A$550,000.

With the shipment of Rig #50, Ensign engaged an AQIS inspector to travel to Nisku, and the rig entered the Port of Brisbane in Queensland with no difficulty.

Even though the rigs were working in Canada, Ensign was aware that certain modifications had to be made to meet Australian state regulations. The electrical regulations in Western Australia (WA) are the most stringent for land rigs that Ensign has encountered globally.

Even though Rig #48 was extensively re-wired in Canada to meet WA regulations, with WA government-approved mechanical and electrical inspectors overseeing the work, all electrical cable joints subsequently had to be replaced when the rig arrived on Barrow Island. This resulted in an additional cost to Ensign of approximately A$250,000.

Both rigs were designed to be highly mobile units, with some units on Rig #48 trailerised and all units on Rig #50 trailerised. On Barrow Island, mobile equipment does not require registration, so Rig #48 could be freely moved.

However, due to the areas in which Rig #50 was going to operate, it required the trailers to be registered. Here Ensign encountered another set of bureaucratic setbacks. The importation of vehicles and trailers to Australia is administered by the Federal Department of Transport and Regional Services (DOTARS), now the Department of Infrastructure, Transport, Regional Development and Local Government. Through a transport consultant, Ensign made an application for DOTARS approval, which was required by state governments in order to register each trailer. Because the equipment was specially designed, DOTARS regulations required special departmental administrative approval as there is no category covering mobile oil drilling equipment.

Ensign was advised, however, that a special application could be made to register low-volume usage vehicles – which was not stated in guidelines. This turned out to be useless in this exercise as each vehicle comprises approximately eight loads, and this approach is limited to the registration of three vehicles per year per company.

Upon arrival of the rig in Queensland in late September, the local Department of Transport inspected, weighed and measured the Rig #50 trailers and made recommendations to Ensign regarding the change-out of some sections of the brake system, as well as side and tail lights. This was undertaken because DOTARS approval had been delayed due to the federal election and the change-out of departmental personnel; therefore the Queensland transport department was unable to register the trailers.

In order to meet client commencement deadlines, a decision was made to move the rig to the first drilling location using heavy-duty transport floats. As of February 2008, DOTARS approval had still not been received, and the first eight wells were drilled with the highly mobile rig having to be moved between wells using heavy-duty floats and cranes for loading. This resulted in additional time and costs of approximately A$220,000.

Recent indications are that Queensland Transport may be prepared to issue special permits for the trailers to be moved unregistered, provided that Ensign give sufficient notice of the routes to be taken and provide escort vehicles for this purpose.

Other transport contractors who have mobilised new twin-steer oilfield rig trucks to the Cooper Basin have encountered similar difficulties, and these specialised new vehicles are having to be floated between drilling locations. The cost is ultimately passed on to the end user.

Other examples of bureaucratic and administrative procedural issues exist. One case in point was the procurement by the Metropolitan Fire Service in South Australia of a command vehicle that was constructed in Queensland and lay idle for more than 12 months while transport registration issues were resolved.

Given the cost and administrative issues in dealing with the Australian bureaucracy at various levels, Ensign will deliberate long and hard about deploying any additional highly mobile ADR-type rigs there. Being a global drilling contractor, Ensign considers contract opportunities in other countries to be simpler to execute, and it is easier to deploy existing rigs to so-called “developing countries” in Africa, the Middle East, Asia and South America.

Surely this is a loss to the Australian petroleum exploration industry and requires governments and governmental departments to work together to ensure the best equipment is available in this country to continue the exploration and development hydrocarbon resources.

John Bushell is vice president international marketing with Ensign Energy Service’s International Division. He has more than 20 years of experience in the contracting drilling industry and holds undergraduate and post-graduate qualifications in technical and commercial disciplines.

This article is based on a presentation made at the APPEA 2008 Conference & Exhibition, 7-9 April, Perth, Australia.

Oil/gas industry knows it has a crisis of image. At last, we’re really doing something about it 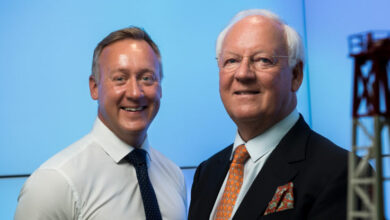