As expandable technology matures, it has become a larger part of the wellbore construction toolbox. Operators no longer see expandables as problem-solving contingency tools, in part because of service companies’ aggressive development. Baker Oil Tools, for example, has accumulated considerable experience in the application of expandable techniques across liner packer systems, multilateral systems, sand screens, bridge plugs, and more.

As the company’s experience accumulated, it led to the deployment, in early 2002, of the first one-trip expandable completion system, which included an expandable hanger, expandable solid pipe, expandable screens, and expandable zonal isolation devices.

At the same time, the company was also developing and applying two other technologies – reactive element open-hole packers and monobore liner extension systems (Figure 1) – that integrated well with expandable applications. Reactive element expandable open-hole packers react with wellbore fluids to swell and seal and are used on both expandable solid tubulars and expandable sand screen systems. Monobore technology makes possible the elimination of one or more casing strings.

Monobore technology provides the option of beginning well construction with one smaller casing size and conserving or increasing hole size in the reservoir. This is an important advantage that can drive down costs significantly, especially in high-cost drilling operations.

The company’s monobore liner extension system has numerous operational advantages. A casing shoe with a recessed ID and location profile enables the liner to be anchored on the bottom of the parent casing, then expanded into the shoe with no ID size restriction below the parent casing. Either of two recess shoe OD sizes can be employed depending on whether the expandable liner is cemented. Zonal isolations and annular isolation at shoe of the expanded liner can be achieved with open-hole packers. If cementing is preferred to open-hole packers for annular isolation, cementing is performed post-expansion, with no special cementing retardants required. Other features of the system include:

• An expandable liner hanger/packer that is set into the recess shoe on the 9 5/8-in. or 9 7/8-in. and ties the 8-in. expandable liner below to the parent casing string with no ID size restriction in the casing above.

• A top-down hydraulic expansion system that prevents losing the hole, expanded tubular sections, or running tools should a major restriction in the open hole (e.g., collapsed formation or system pressure integrity) occur, that could cause expansion cones to become blocked and irretrievable downhole.

• A retrievable guide shoe that guides the expandable liner into the open hole. Only one trip is required to set the hanger, expand the pipe and retrieve the guide shoe.

The Close Tolerance Expandable Centralizer (CTEC) was jointly developed by Antelope Oil Tool and Baker Oil Tools for proper centralization of expandable tubulars. Flush-mounted on the expandable tubular, this centralizer has zero running and zero starting force. For example, the CTEC can drift at 8.50 in. through existing 9 5/8-in. casing on an 8.0-in. OD tubular. Once activated by expansion of the tubular, the CTEC provides for centralization in open-hole sizes up to 11.375 in. to assure proper cementation (Figure 3).

The friction produced by this process secures the centralizer in place for pipe running without the need for a stop collar, which precludes scoring or marking of the pipe.

The CTEC can be installed anywhere on the pipe, with several units per joint possible. Optimum restoring force is provided in the underreamed hole, and the CTEC remains tightly secured to the pipe after expansion. The pipe is run normally; no downtime is required because the centralizers are installed on the tubulars prior to rig mobilization (Chart 1).

In 2005, reactive element packers for open hole, which swell and seal when exposed to wellbore fluids, saw their first use. Previously, these packers were always used in open-hole production applications and not in drilling applications. In order to integrate the reactive element compound technology with drilling technology – and then with a monobore liner extension system – casing and hole size, differential pressure testing, and other factors had to be considered (Figure 2).

Using this technology, a minimal wrap of element could be applied to the expandable tubular to enable drifting through the host casing, and with the underreamed open hole sized correctly, the expansion of the tubulars combined with the swelling of the element would provide the necessary annular isolation barrier. Additional factors included the underreamed hole size where the monobore liner would be deployed and also potential washout factors.

The reactive element technology since early deployment has advanced sufficiently to make it a viable solution for eliminating cement in this application. The REPacker technology and Monobore Expandable Liner Extension system technology truly converge for tremendous savings in OPEX when both NPT for drilling hazards and cementing time are considered.

The linEXX Expandable Liner System places a liner string in the wellbore to block off sections where unexpected problems are encountered while drilling or as part of the initial well design.

The Reactive Element Packer is a self-energizing swelling elastomer packer that will eliminate annular flow around tubular assemblies in either open or cased hole. The packer is a sealing device built on a casing pup that matches the mechanical properties of the liner.

The TORXS Expandable Liner Hanger System allows the hanger to be set prior to displacing cement, and the packer is set independently after cement is in place. This significantly reduces liner cementing risks associated with other expandable liner hanger systems.

The linEXX Expandable Liner System places a liner string in the wellbore to block off sections where unexpected problems are encountered while drilling or as part of the initial well design.
Mar 12, 2009
0 1,220 5 minutes read
Facebook Twitter LinkedIn Share via Email Print 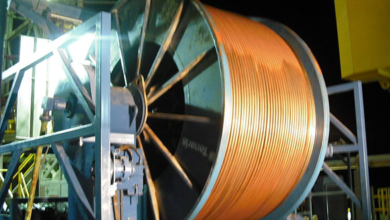