Winners of the IADC North Sea Chapter (NSC) Annual Safety Awards were announced during a ceremony on 15 May at Ardoe House Hotel, Aberdeen. Chapter chairman Steve Rae, Seawell, welcomed nearly 400 guests who joined him to recognise and celebrate the efforts of IADC members as they strive toward HSE excellence.

Mr Rae reviewed the implications of the recent helicopter tragedy and commented, “Let’s remember the ultimate goal we have set ourselves as an association – ‘incident-free operations’ each and every day.”

Claus Hemmingsen, Maersk Drilling, also spoke in his capacity as 2009 IADC chairman. The “industry speaker” for the evening was Bob Keiller, CEO of PSN, co-chair of the Oil & Gas UK Board and chair of the Helicopter Issues Task Group.

A study to combat Alzheimer’s disease funded by long-time IADC supporters Ray and Ann Brazzel, Bandera Drilling, is seeking additional donations. Organizers are hoping to continue testing a promising dietary supplement that has been shown to improve memory, cognition and daily functional capacities in patients.

The basic science behind the development of the supplement was originally initiated by a Texas-based research institute. The supplement is a special sugar derived from the aloe vera plant leaf gel. In a pilot study, the supplement was added to patients’ daily diets and was shown to improve dementia in 42% of 48 patients. This encouraging finding then led to a controlled study now in progress at a retirement center, which is organized and monitored by a division of a medical school. Positive results have already been reported.

Excited by these initial results, organizers are hoping to raise $100,000 to $200,000 so that documentation of the supplement’s benefits can be improved and additional patients can be taken in.

A formal controlled study, estimated to cost $1-1.5 million, is also being planned. The cost is higher than studies for typical prescription drugs because using a nutritional supplement to support gene-orchestrated restorations is a departure from the standard pharmaceutical paradigm; the standard for proof and validation is also higher.

Mr and Mrs Brazzel have been involved in the study since December 2006 and have been waiting for the study to get qualified through a review board and finally become a reality.

“Two of Ray’s sisters died from Alzheimer’s, so you can understand that this research is dear to our hearts,” Mrs Brazzel said. “It is our hope that others who have a heart for those suffering with this disease will want to join us.

For more information or to make a donation, contact Bandera Drilling at +1/325-676-5591, or e-mail Mrs Brazzel at ann@banderadrilling.com. This e-mail address is being protected from spam bots, you need JavaScript enabled to view i

IADC MAKES DONATION TO US CHARITY

IADC recently donated US$5,000 to Homes for Our Troops, a nonprofit organization that builds specially adapted homes for severely injured service members returning from Iraq and Afghanistan. The homes are provided at no cost to the veterans.

IADC’s donation was made specifically towards the construction of a home for Naval Petty Officer Anthony Thompson, who was injured in 2007 during his second deployment to Iraq. In a bombing near Fallujah, he suffered a traumatic brain injury, an incomplete spinal cord injury and a punctured right lung. Now a paraplegic, he remains at the James A. Haley VA in Tampa, Fla. His wife Ivonne was a schoolteacher but now cares for Mr Thompson and their toddler son A.J. full time.

The house being planned for the Thompson family is in Houston. It will be a barrier-free house with special fittings, such as wheelchair ramps, hands-free toilets and a ceiling lift system, all designed to provide Mr Thompson as much independence as possible.

The cost for each home averages around US$300,000. Fund-raising for the Thompson home is in progress, with a volunteer registration day held in Houston on 29 April. A general contractor has already been identified for the project, but the group remains in need of donations (monetary, land, materials, equipment and services) and volunteers (professional tradesman and key volunteers).

Homes for Our Troops has built approximately 40 homes since its inception five years ago and plans to build about 30 additional homes this year in various locations around the US. It is supported entirely by donations, and the group says it has received an amazing level of support across the US.

Among other charitable donations around the world, IADC has given more than $12,000 to Homes for Our Troops since 2008, mostly in lieu of speaker gifts at conference events. Involvement was initiated through Oilfield Helping Hands, another nonprofit group that helps Houston-area oilfield families in critical need of financial assistance.

For more information, please contact project facilitator Lisa Fitzgerald at +1/508-823-3300 or LFitzgerald@HomesForOurTroops.org. This e-mail address is being protected from spam bots, you need JavaScript enabled to view it Details and a video about Mr Thompson can also be found online at www.homesforourtroops.com/thompson.

What this means for you:

• All new instructor applications must follow the new requirements immediately.

• All currently approved instructors retain their approval status for the courses, levels and stack qualifications currently held until 30 June 2011. Their current certificates do not expire until 2011.

• Any request for change in instructor status must follow the new requirements immediately.

Details of the new requirements are documented in Bulletin 09-01, which can be found online at www.iadc.org on the WellCAP page.

Scott Gordon, Unit Texas Drilling, has been chosen as the new chairman of the IADC Contracts Committee, succeeding Dave Faure, Transocean. Mr Gordon has previously served as vice chairman – land of the committee. In that capacity, he led an extensive review of the 1998 US land model contract forms, which resulted in the 2003 version, still in use today.

'Biofouling' is tip of green iceberg 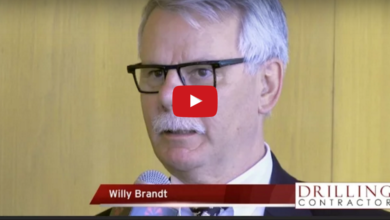 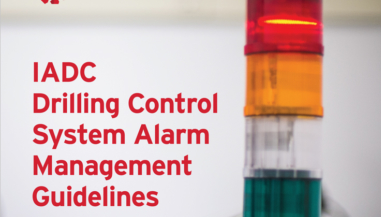