Independence Contract Drilling introduced its newest-design 1,500-hp ShaleDriller Rig 201 in Houston on 7 December. The rig, contracted to work for Newfield Exploration in the Eagle Ford beginning on 1 January, has been built with an integrated walking system that allows the unit to move at up to 60 ft/hr, as well as a full dual-fuel setup that allows the rig to run on both diesel and natural gas. “The operator’s main goal is to spend their money and their time in a year drilling instead of moving rigs,” Chris Menefee, vice president and general manager of Independence, said. “If they can put eight wells on a pad and walk a rig back and forth, they’ve got something that’s more hi-tech that’s capable of doing what they want to do better than the conventional method.”

The integrated walking system features uniquely designed hydraulic shoes driven by AC power that are built directly into the substructure and therefore are part of the rig, Mr Menefee said. “Other walking systems are ‘add on’ systems retrofitted on conventional drilling equipment leading to more lines, wires, hoses and manifolds,” he explained. “Our shoes are part of the rig design so the time spent preparing to walk is much cleaner, safer and more efficient.”

Further, when the walking shoes are not utilized, they are designed to support the substructure and can be used to level the rig during drilling operations. “Also, our system has an umbilical wire tray designed for multiwell pad drilling,” Mr Menefee continued. “The 200 Series ShaleDriller was engineered to walk with drill pipe in the mast and move from pad to pad without the use of a crane, which results in cost savings for the operator.”

Rig 201 is the second rig in Independence Contract Drilling’s four-rig fleet, other than one rig working in West Texas, to feature a dual-fuel setup. Mr Menefee said that his company will retrofit its other two rigs with dual-fuel systems as well and that, going forward, dual fuel will be equipped on all newbuilds. “We’re hoping we’re ahead of the curve a little bit by actually offering it as part of the rig package,” he said. “I think it’s going to be as big as walking shoes or AC power; we want to be one of the first ones that’s kind of taking it on our own.”

Mr Menefee noted that being able to run on natural gas holds significant advantage for gas companies currently storing field gas. “If they can have a rig in the field where that gas is stored and plug right into it and drill their wells off of it, that’s where it’ll be a big savings instead of trucking diesel fuel back and forth.”

Rig 201, which will drill a seven-well project for Newfield at 30 days each, is the fourth new rig to be built in Independence’s fleet, but the first with a new substructure put together from one piece consisting of a bottom substructure and rig floor. “It all rides on the back of one truck so you can haul it up and down the road, and they drop it off on location and different pieces start unfolding,” Mr Menefee explained. Hydraulic cylinders are attached to the unit to set it in place before other pieces, such as stairs, are added.

Independence Contract Drilling solely builds AC-power rigs focused on unconventional asset development. “There’s a game change going on in terms of the development of unconventional resources,” Byron Dunn, CEO of Independence, said. “Half of the US land rig fleet is economically obsolete right now; we have entered the early stages of a complete re-equipping of the US land rig drilling fleet.”

Mr Dunn said that with industry and analysts projection of $5 gas in 2015,  rig count will grow. “Not only do we have to add new equipment, we have to replace the economically obsolete older fleet,” he said. “This type of equipment (like Rig 201) is going to be in short supply for the next 10 years as we re-equip the entire US land rig fleet and produce the unconventional resources.”

Largely, Independence focuses on automating rigs by using remote packs, touchscreens and AC-powered hydraulics. “Some of this is nothing new, but we’ve taken it to another level on this is one particular load by using braces that fold the rig floor up,” Mr Menefee said. “On older-generation models of rigs, those would have to be pinned by hammers, people in baskets and cranes where now they fold out literally by driving an automated pack.” At the push of a button on a remote control, arms will fold out and drive the pins in, he said, which was done as a way to increase safety. “Anytime you can eliminate something by doing it automated you’re ultimately eliminating an accident.”

ShaleDriller is a trademark of Independence Contract Drilling. 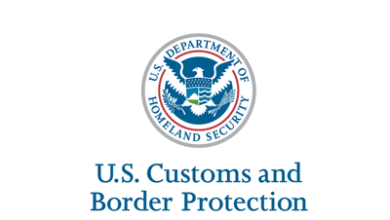 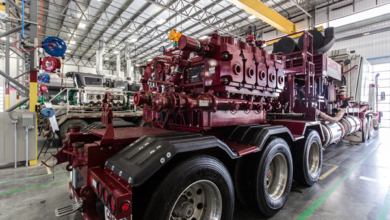 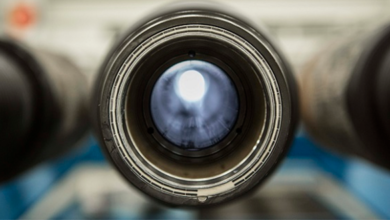