The people shortage is looming large in the drilling industry, and it’s an issue that can’t wait any longer, Kurt Hoffman, executive VP and COO for Shelf Drilling, said in a presentation titled “Managing the Future Today.” “We’ve got to deal with this today to be able to get a handle on what the future lies for us ahead,” Mr Hoffman said last week at the 2013 IADC Critical Issues Asia Pacific Conference in Bangkok. He also urged the industry to view the people shortage not as a challenge, but as an opportunity. “We always turn a critical issue into a critical opportunity, and that’s what so exciting and satisfying about working in this industry.”

For Shelf Drilling, which focuses solely on jackups and operations in the Eastern Hemisphere, the 70-plus newbuilds under construction point to similarities with the previous build cycle from the late ‘70s to early ‘80s. “I’m sure that if the IADC had a forum back then called Critical Issues, there would have been a drilling contractor who would have stood up and said, how are we going to man this? But they took the critical issue and turned it into an opportunity, and all of those rigs got manned. In fact, most of them are still working today.”

There is a distinct differentiating factor between the last cycle and the current one, however: Today’s new jackups are mostly cyber-based and require employees with a much more sophisticated set of skills. “Similar to the deepwater cycle, it’s a completely different set of rig employees that we’re looking for to operate these rigs,” Mr Hoffman emphasized.

Many of these people will have to be highly educated about specific types of systems such as electronics, hydraulics and AC variable frequency drives. “The pond that everyone still fishes in is from the standard rig fleet, whether it be land rigs or standard jackup rigs. We all need to be aware of this and how it will raise our costs over time,” he said.

At Shelf Drilling, in order to operate safely amid an influx of new-hires and the increasing complexity of rig equipment and operating environments, the company tries to keep everything else as simple as possible. “Protect yourself, protect your team, protect your asset” is the motto under which Shelf employees operate. “If we do those three things, we’ll also protect the environment that we all globally share,” Mr Hoffman said.

Simplicity also underlies Shelf’s new SD-400 jackup design, which targets the non-harsh environment geographies where the company operates. “It’s an efficient rig floor design based on conventional, proven technology. We don’t have sophisticated cyber systems. We don’t have sophisticated offline pipe-handling systems. We don’t have zone management,” he explained. However, the rig does have significant offline capability and a robust jacking system that can jack up/down on a full pre-load, he said.

The rig also features a 400-ft water depth rating, an 80-ft by 40-ft cantilever envelope, 11,000 kips variable deck load, 1.5 million-lb hookload and accommodations for 150 people. “And very important for us was to design a rig that has a 116C footprint… This isn’t less technology. If you look at the jacking system, the leg strength, the variable deck load and quarters, what we’ve done is we’ve kept the rig floor design fit for purpose for the areas where we work.” 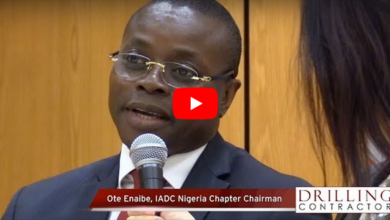