2018 stands as the best year for global oil and gas exploration since 2015. Guyana, Russia and the US top the list with major discoveries, according to Rystad Energy. Discovered resources this year have already surpassed 8.8 billion BOE . Rystad expects the number to grow to 9.4 billion BOE by year-end.

Offshore discoveries represent around 82% of total volumes. 2018 has also seen a significant uptick in the reserve replacement ratio to around 15% from 11% in 2017.

“Global exploration activity and discoveries have halted their year-after-year decline and look set to rise in the next year. This as an exciting recovery, which runs contrary to a decline in global exploration spending from 2014 to 2017,” Mr Shenga added.

Exploration spending decreased by nearly 61% from 2014 to 2018. Exploration investments halted their fall in 2018 and are expected to rise in 2019.

“This not only proves that E&P companies are once again willing to invest in exploration but also highlights their idea of ‘smart investments’ to de-risk expenditures as much as possible,” Mr Shenga said.

The decrease in overall exploration costs combined with an improved success ratio have led to tremendous improvement in the discovery cost per BOE. 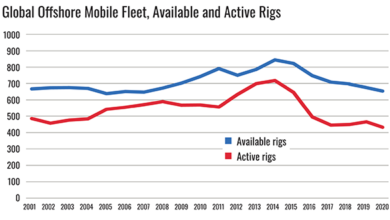