Even as environmental agendas delay well permitting and cause other headaches, new opportunities may loom for “green” drilling. Two areas in particular present themselves – CO2 geologic storage and geothermal drilling.

As Pritchard Capital somewhat breathlessly phrased it in a recent e-missive, “Geothermal is hot and getting hotter.” As previously reported herein, $90 million of US funding was designated for geothermal technologies. The funding is for work on conventional geothermal resources and for “enhanced” geothermal.

Longtime DC readers may recall “enhanced” geothermal from 1991, when Los Alamos invited IADC to organize a drillers’ delegation to tour the New Mexico facility and learn about “hot dry rocks” – now reborn with the rather more marketable moniker “enhanced” geothermal. In short, an injector and a producer are drilled into non-permeable, heat-bearing strata. The rock is fractured, tepid water pumped in and hot water produced to generate electricity.

A $500 million-plus annual bonanza in drilling and well services predicted in ’91 has yet to emerge. Even today, backed by fed funds, progress is shaky. One recent, well-publicized DOE-funded project in California’s Geysers by AltaRock Energy was suspended in early September after failures re-entering and deepening the first well. Each of AltaRock’s three redrill attempts ended in failure, the well collapsing and trapping the BHA. The company suggested several culprits – long-term injection, difficult geology, and the well rework itself. AltaRock would not comment to DC beyond the information on its website.

Steamy enthusiasm for geothermal exists outside the US. Two days before writing this column, IADC received a query for a deep-drilling land rig for a four-well geothermal project in northeastern Germany. According to Mr V Goebel, the local adviser, the site is near Schwerin. Related drawings and the e-mail address for Mr Goebel follow this article. “Our timeline becomes real as soon as we find the required drilling contract,” he wrote.

The other prospective green gusher for well services is CO2 geologic storage. Suggestions for CO2 disposal modes abound. Our industry has been injecting the stuff downhole in tertiary oil-recovery programs for decades. Kinder Morgan CO2 alone delivers some 1.3 billion cu ft through 1,300 miles of pipelines. Much of this is produced from domes in the western US, ironic in an age of CO2 terror.

CO2 is catching the attention of the industry. DC recently chatted with George Koperna of Advanced Resources International, co-chairman of an SPE CO2 conference in November. “We’re talking about a potential for widespread development,” Mr Koperna told us. Details are available in video and text formats here.

EPA wants to be doubly – triply! – sure that nary a molecule of dreaded CO2 escapes its subterranean tomb. Hence, standards for wells and reservoirs will be stringent, according to Mr Koperna. (One could be forgiven for thinking we were dealing with plutonium or PCBs.) “You have to prove it’s going to stay there,” Mr Koperna said.

Still, even though all CO2 must be injected below the lowest drinking water aquifer, most of these wells don’t TD much below 3,500 ft or so – shallow depths.

In early October, US Energy Secretary Steven Chu just announced $1.4 billion-with-a-”B” for 12 projects to capture and store CO2, including saline injection. C6 Resources will capture, transport and inject a million tons of CO2 annually into a saline formation two miles underground – not so shallow, a $3 million DOE grant. Other recipients planning underground disposal include Praxair Inc, Shell Chemical Capital, ConocoPhillips and the University of Utah.

Finally, DOE announced that a partner has successfully injected 1,000 metric tons of carbon dioxide (CO2) into the Mount Simon Sandstone, a deep saline formation that is widespread across much of the Midwest. Depths were 3,250 ft-3,550 ft.

While our industry finds itself at odds with much on the environmental agenda, silver linings might still exist. Perhaps these are two.

You can reach Mike Killalea at mike.killalea@iadc.org.

Perspectives: Not doing what’s always been done, but what’s better 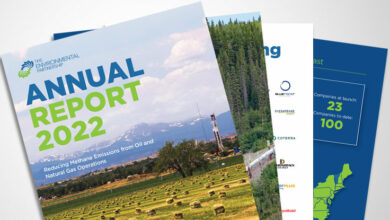 Automation’s learning curve must be overcome