Maersk Drilling has received a contract extension from BP Norway for the Maersk Reacher jackup by two years from September 2014 to September 2016. BP Norway holds options to further extend the contract by up to additional four years until September 2020. The estimated value of the two-year extension is US $222 million.

Maersk Reacher is the fourth in a series of four high efficiency, 350-ft jackups delivered in 2008 to 2009. In 2011, Maersk Reacher was upgraded to comply with relevant requirements in Norwegian shelf regulation. The rig received an Acknowledgement of Compliance enabling it to commence a three-year firm contract with BP Norway in September 2011.

“We are very pleased with the contract extension from BP Norway. Together with the five-year firm contract for a newbuild jackup announced in September 2013, we see the contract extension for Maersk Reacher as a further strengthening of our relationship with BP. The contract extension adds US $222 million to our revenue backlog providing a high revenue visibility and a solid basis for our ambitious growth strategy,” said Claus V. Hemmingsen, CEO of Maersk Drilling and member of the executive board of the A.P. Moller – Maersk Group.

In addition, the company has also entered into a one-well rig share agreement with BP and Kosmos Energy for the rig Maersk Discoverer. The rig is expected to commence drilling operations on the FA-1 (formally Eagle-1) exploration well in the Foum Assaka Offshore block in Morocco during the first half of 2014.

Constructed in 2009, the Maersk Discoverer is a sixth generation, ultra-deepwater, dynamically positioned semisubmersible capable of drilling to total depths of up to 30,000 ft, and operating in water depths of up to 10,000 ft. 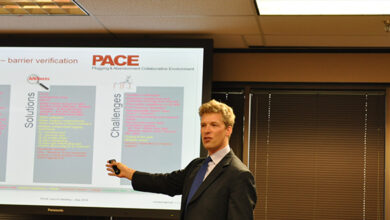