Two landmark Asian development projects with heavy drilling emphasis were recognized as finalists for the Excellence in Project Integration Award, bestowed at the 2011 International Petroleum Technology Conference (IPTC), 7-9 February 2012 in Bangkok. The event had been postponed from the previous November. IADC is an Endorsing Organization for IPTC.

Seria: Fishhook for an oily catch

The Seria redevelopment represented a capital investment of more than $500 million, with drilling accounting for 80%, said project lead Adedayo Dada of Shell. The idea was to create an integrated waterflood to enhance production.

Challenges were complex geology, including multiple un-appraised faults, poorly understood fluid-fill model, and marginal economics, if a conventional offshore platform were to be used.

Two alternatives – the conventional offshore platform and an artificial island – were dismissed, largely due to the economics.

Instead, Shell opted to drill “fishhook” wells beneath the structure that curve back up toward the surface and into the formations. The wells were drilled from shore and reached some 5 km from shore in water depths less than 5 meters. Maximum well depth at the bottom of the “hook” ranged from 1,200 meters to 1,700 meters, Mr Dada said.

While the fishhook wells offered the best CAPEX and least environmental impact of the three options, they posed a high technical risk, Mr Dada said. Further, Shell’s technical expertise for these operations was somewhat wanting.

The project increased production to a 30-year high and saved more than $100 million compared with the offshore platform scenario.

Extending a world reach in Sakhalin

ExxonMobil’s Odoptu First Stage Production project was the second step in developing the three Sakhalin-1 fields, which also include Arkutun-Dagi and the first development, Chayvo. Three of the extreme Odoptu extended-reach drilling (ERD) wells are among the seven longest-reach in the world. Notably, OP-11, which at 12,345-meter measured depth and a step-out of 11,479 meters, holds the world record for longest ERD well. The wells were drilled with the Yastreb rig, which was built for the earlier Chayvo development, then upgraded and relocated to Odoptu.

The prize was vast. Recoverable reserves for these fields, discovered in the 1970s, total 2.3 billion bbls of oil and 17.1 Tcf of gas, said Sam Roxburgh, project executive.

Odoptu’s daunting challenges included an extreme sub-arctic climate, including pack ice for six months of the year; an environmentally sensitive area, with attendant strict regulatory guidelines; and very limited infrastructure. In addition, the region is highly earthquake-prone and the subsurface features a complex geology and a reservoir for which engineers entertained doubtful knowledge.

In the midst of the development, what was described as a 100-year blizzard struck in January 2010, damaging work tents, as well as facilities under construction. Photos of unfinished, frozen facilities shared by Mr Roxburgh evoke an unwished-for winter wonderland. Nonetheless, no one was injured at the site. In fact, he said the project team helped in rescue and humanitarian efforts in the local community in the storm’s aftermath.

In the first stage, nine ERD wells were drilled beneath the Sea of Okhotsk. In addition, onshore processing facilities were constructed.

The record-setting OP-11 well was drilled and completed in just 60 days, suffering less than 1% nonproductive time.

In addition to setting a satisfying world drilling record, the project was completed in time and under budget. During the 16-month project, not a single lost-time incident was recorded. The project won the ExxonMobil Development Company’s President SSH&E award for three consecutive years. The project, which kicked off on 15 September 2010, added 11 million bbls of oil/year. 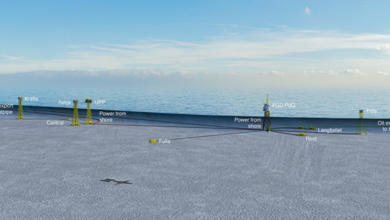