Industry groups, including IADC, urged the Bureau of Ocean Energy Management, Regulation and Enforcement (BOEMRE) to open its regulatory process to the public and reiterated an invitation to the agency to participate in API’s open standards-setting process. The recommendations were made as part of the groups’ formal comments filed to the BOEMRE in December on the interim final rule on offshore drilling safety.

The 24-page comment emphasized that notice and comment rulemaking in the future would help to make the agency’s rulemakings more efficient and likely achieve a safety benefit, and would assist BOEMRE in promulgating more legally defensible regulatory actions.

The agency was also urged to immediately issue a final rule to clarify that it will not interpret “should” as “must” with regards to more than 14,000 discretionary, non-mandatory provisions in 80 API standards. There is no regulatory basis for adopting a blanket requirement for all discretionary language to become mandatory, the trade groups pointed out. Furthermore, mandatory compliance with discretionary API standards provisions is impossible in many cases – the standards were not drafted with mandatory compliance in mind.

To highlight this issue, industry groups provided detailed commentary on key standards – Spec 6A, RP 65-2, RP 53, MPMS Chapter 7, 20.1 and 21.1. These documents represent an important subset of the referenced standards and include valves, blowout preventers, cementing practices and measurement techniques. The commentary pointed out how conflicts would arise if “must” were substituted for “should.”

In December, IADC VP – offshore technical and regulatory affairs Alan Spackman testified in Washington, DC, before the US Chemical Safety Board (CSB) as part of its ongoing investigation into the causes of the Macondo incident. He reviewed IADC’s HSE Case Guidelines for MODUs and described why a safety case based on these guidelines is appropriate for US deepwater drilling operations. He also described the API-IADC Well Construction Interface Document and how it adds the elements of well basis of design, well execution plan and critical well activity risk assessments to the traditional HSE management system bridging arrangement.

Further, Mr Spackman urged the agency to assess its resources in developing an approach to implementing the HSE case. Ongoing dialogue with industry is needed, and a multi-year roadmap for implementation should be formed.

On another front, industry has objected to language in a House bill that could extend offshore permit reviews from 30 days to 90 days. A letter was sent to the chairmen and ranking members of the Senate Committee on Appropriations and the Subcommittee on Interior, Environment and Related Agencies in December. The “continuing resolution” bill passed by the US House would create additional uncertainty for offshore energy development when clarity and stability are needed most, the trade groups pointed out.

Industry groups also sent a letter to the chairmen and ranking members of the House and Senate Appropriations Full and Subcommittee asking Congress to provide additional resources to the BOEMRE to increase staff, training and inspectors. “It is imperative that BOEMRE is provided the necessary resources to review and process permits to drill OCS waters, and to maintain a vibrant leasing program in the OCS,” the letter stated.

IADC endorses IPTC 2011 to be held in Bangkok

Join IADC at the 2011 International Petroleum Technology Conference! IADC is an endorsing organization for IPTC 2011, 15-17 November in Bangkok. This year’s event, the fifth edition, has the theme “Technology and Operational Excellence: Keys to Sustainable Global Energy” (www.iptcnet.org).

Papers will cover more than 30 topics spanning all E&P practices. For drilling and completions, topics are:

The conference will also include papers on HSE, security, human resources and social responsibility, as well as on geoscience, production and other topics.

The IADC North Sea Chapter (NSC) has donated £5,000 to the ARCHIE Foundation, the official charity of the Royal Aberdeen Children’s Hospital and community-based Child Health through Grampian, Orkney and Shetland.

“We are delighted to be able to present this check to a charity which is making a real difference to the lives of children of the North East of Scotland and the Islands who require medical care in the Royal Aberdeen Children’s Hospital or in their own community,” NSC chairman John Monks, Northern Offshore, said. The donation will help the hospital to purchase specialized equipment.

2011 IADC chairman: Industry leaders must walk the walk on safety 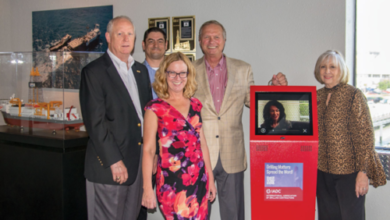