On 18 August, the US Environmental Protection Agency (EPA) proposed new standards to cut methane emissions from the oil and gas industry by 40-45% below 2012 levels in the next 10 years.

The proposed standards will require oil and gas facilities to find and repair methane leaks, capture natural gas from hydraulically fractured wells and limit emissions from pumps and other equipment. It also clarifies the agency’s air permitting rules as they apply to the oil and gas industry.

The standards for new and modified sources are expected to reduce 340,000 to 400,000 short tons of methane in 2025, the equivalent of reducing 7.7 million to 9 million metric tons of carbon dioxide, according to the EPA.

Additionally, in July, the EPA issued a proposal for its voluntary Natural Gas STAR Methane Challenge Program. The program provides a mechanism by which companies can make and track ambitious commitments to reduce methane emissions.

The program is based on extensive stakeholder outreach and reflects a revision, based on industry input, of the EPA’s previously proposed framework, Gas STAR Gold, for an enhanced voluntary partnership in the oil and gas sector.

The proposed program will create a platform for leading companies to go above and beyond existing voluntary action and make meaningful and transparent commitments to yield significant methane emissions reductions in a quick, flexible and cost-effective way.

The EPA will host a series of methane challenge webinars to provide details about the proposed Methane Challenge Program. Each webinar will address specific oil and gas sectors.

The EPA intends to launch the Methane Challenge Program later in 2015, possibly in conjunction with the next Natural Gas STAR Annual Implementation Workshop in November 2015.

On 4 June, the US Environmental Protection Agency (EPA) issued a draft analysis in which it was found that hydraulic fracturing activities posed no widespread risk to drinking water. In response, IADC President and CEO Stephen Colville issued the following statement:

“Hydraulic fracturing technology has dramatically increased accessible US oil and natural gas resources. The US is already benefiting greatly from enhanced energy security, investment spending, jobs and taxes. Increasing use of natural gas in the utility sector will also greatly lower US CO2 emissions. The industry has always known that this way of tapping into our natural resources can be done safely, without damaging the site location and with complete confidence in the integrity of drinking water sources.

“The future success of the US economy will rely directly on this technology for many decades to come. After years of unproven accusations that hydraulic fracturing harms drinking water, it is beyond time that the EPA puts these false and damaging accusations to rest.”

The report reflects regulatory actions announced in the Federal Register or other available sources through June 2015.

In August, API issued Bulletin 92L, Drilling Ahead Safely with Lost Circulation in the Gulf of Mexico (GOM).

Lost circulation during drilling operations, in the form of both seepage and fracture losses, is common in the US GOM. Through experience, operators and drilling contractors have learned that with proper information, planning and execution, lost circulation can be safely managed to allow well construction goals to be met.

Bulletin 92L identifies items that should be considered to safely address lost circulation challenges when the equivalent circulating density exceeds the fracture gradient. It addresses drilling margins and drilling ahead with mud losses. It provides guidance when lost circulation is experienced with either surface or subsea stack operations.

Information contained in the bulletin may also apply to other Outer Continental Shelf environments.

Importantly, Bulletin 92L provides a non-prescriptive approach to addressing the issue of “drilling margins” contained in the Well Control Rule proposed by the US Bureau of Safety and Environmental Enforcement. 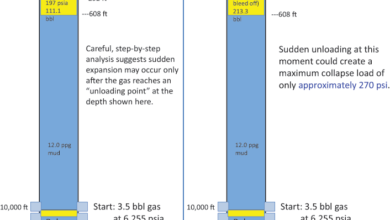