As worldwide demand for hydrocarbons continues to grow and with shallow reservoirs rapidly depleting, most new discoveries are being made at greater depths (5,000 m or deeper). These wells are increasingly directional, presenting new challenges and facilitating the need for more powerful equipment that decreases the overall drilling cost.

Recent drilling campaigns in Southern Mexico include a turnkey project where one of the main challenges was the extensive 17 ½-in. section, which drills vertically through the Pleistocene and Miocene formations, to set casing in the Oligocene shale (1,000-3,000 m TVD). The most common problems encountered in this section were slow rate of penetration (ROP), excessive bit wear and premature damage, inadequate hole cleaning, stuck pipe, coarse sandstones, problems running casing and wall erosion. After analysis, it was found that most of these problems were directly related to downhole vibrations.

• 27 wells were drilled with a combination of roller cone and fixed cutter (FC) bits.

A comparison of ROP and interval drilled between milled tooth and FC bit performance showed that although ROP was improved with the use of FC bits, the interval drilled was not sufficient to make FC bits economical.

Premature cutter breakage, ring-outs and other mechanical damage indicated the presence of various types of downhole vibration, limiting both ROP potential and durability of the drill bits.

After realizing the potential benefits of using fixed cutter bits in this section, numerous drill bit types from different manufacturers were used to determine the blade count and cutter size configuration that would yield the best results.

Different drill bits with 19-mm cutters and six, eight or nine blades were tested, but performance and dull condition were highly variable and could be best explained by the occurrence of downhole vibrations. Therefore, it was determined that improving drilling stability would lead to better, more reliable performance.

Previous field experience with 19-mm cutter bits suggested that the use of a smaller 16-mm cutter would reduce ROP potential, increasing the cost/ft of the section.

However, analysis of the performance of an 8-bladed, 19-mm bit shows that the cutters were not being used to their full potential. Taking the equation:

and applying it to the average ROP of the PDC bit runs in the project (9.5 m/hr), if running at an average of 140 RPM, we would have:

Such a low depth of cut leads to tremendous stability challenges. Typically, depths of cut at or below 1 mm/rev leads to problems with phenomenon such as bit whirl. However, more aggressive bits under-performed in some cases, perhaps due to both lateral and torsional vibration phenomena such as stick-slip. These observations indicate that the solution was not a more aggressive bit but rather a more stable bit.

To make hole, the drill string must be twisted sufficiently to build torque at the bit. When the resistance of formation at the cutters is surpassed, the bit starts cutting and the torque is relieved and built up again, creating a sequence of torque cycles. This cyclic process, at a frequency generally less than 1 Hz, can be monitored and properly analyzed. This torsional energy is distributed up and down in the drill string just like a spring/mass system, generating torsional vibration.

During the slip phase of stick-slip, the bit whirls, leading to large lateral shocks.

Additionally, poor cleaning can lead to a similar torque peak phenomenon. Cuttings build-up makes the bit less efficient and reduces the ROP and depth of cut. This in turn reduces the torque generated and consequently leads to the risk of stick-slip

In addition to the problems that vibration causes at the bit, there are issues in the BHA. It has to be remembered that all lateral impact is resisted by the borehole wall. Depending on the inclination, severity of the impacts, lithology and resistance of the formation, the borehole wall can become damaged enough to lead to stuck pipe; adversely, in hard, compact formations, vibration will lead to early string failure, the destruction of BHA tools and fishing jobs.

The optimal physical phenomenon of stable drilling is characterized as “all cutters drilling with a constant design load throughout the application.” This is almost impossible to achieve since torsional vibration exists due to the rotation of elastic steel of drill pipe, for instance. Torsionally and laterally stable drilling results from cutters being constantly and consistently loaded, so the torsional and lateral force peaks are minimized.

The drilling industry created mechanisms to maximize on-center drilling at the bit long ago. These include stabilizing the BHA immediately above the bit with roller reamers or stabilizers. More recently, others technologies were developed to be deployed at the bit and/or above the bit. A deeper investigation and understanding of four fundamental performance indexes in bit design is leading manufacturers to produce more stable, rather than more aggressive, bits. Increasingly, junk slot area, blade thickness and cutter sizes are not the main concerns. Bits are being selected by matching the four main indexes – ROP, durability, lateral stability and steerability – to the specific applications. The correct mix of these indexes has led to the development of bits for specific applications such as rotary steerable, motor, horizontal, vertical and surface high-ROP bits.

The indexes are interdependent, which means that a single bit cannot have all indexes maximized at the same time, e.g., developing a bit for high ROP will lead to less durability and perhaps less stability.

The likely presence of gravel in the upper sandstones led to the determination that the first bit out of casing should be an IADC 115 premium roller cone bit to avoid premature damage to the cutters and a consequently short run.

The second bit was selected using a proprietary software that quantifies and ranks different drill bit designs on the basis of steerability, aggressivity and durability.

Three wells were drilled using this new technology. Each of them had previous casing set at around 1,000 m TVD and drilled to about 3,000 m TVD, like all the other relevant offsets in the area. All the sections drilled out with a roller cone bit as recommended, were pulled at the point where ROP declined, then the PDC bit was run as programmed.

• There were no symptoms of vibration damage.

• Again there was no evidence of vibration damage.

The results achieved can be seen in the graphs on the facing page.

• Vibration is a major cause of drilling inefficiency, especially in large-diameter holes, because of the high magnitude of forces generated by the cutter/rock interaction and the huge inertia forces involved at the bit and in the BHA.

• Depth of cut is important to drill bit stability and drilling performance.

• Optimal bit selection comes from the precise combination of bit aggressivity, durability, stability and steerability for a given application.

• Alternative designs with ultra-stable cutting structures should be considered for further development in these fields.

Acknowledgments: The authors would to thank IPM-Schlumberger for making public the records achieved and ReedHycalog for its technical support. 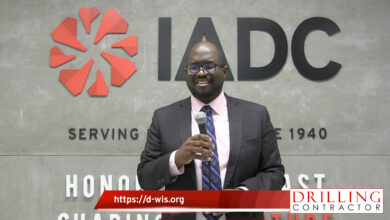