A study of offshore E&P in Asia Pacific, unveiled at the Asia Offshore Technology Conference in Singapore on 16 April, predicts a marked increase in the proportion of deepwater drilling in the region over the next five years. “This is one of the fastest-growing areas worldwide,” said John Westwood, group chairman of Douglas-Westwood, which carried out the study, “Asia has traditionally been seen as ‘where old rigs come to die,’ but this will change. In most Asia Pacific regions, shallow-water production is maturing rapidly, driving a requirement for deeper water exploration. Regional deepwater production currently accounts for 7% of supply and is expected to reach 17% by 2020. However shallow-water fields with high CO2 and H2S content are another significant challenge.”

The report was based on interviews with 44 major players in the Asia Pacific region, 53% of whom came from E&P and drilling-related companies. It was commissioned by DNV Deepwater Technology Centre, Innovation Norway, the commercial section of the Royal Norwegian Embassy and the Norwegian Business Association in Singapore, in part motivated by last year’s launch of DNV’s Deepwater Technology Centre in Singapore.

“Once the industry’s needs are fully understood, we can align our R&D initiatives and service deliveries with such challenges” said Alex Imperial, managing director of DNV Deepwater Technology Centre.

The report suggests that a total of 6,995 wells will be drilled in Asia Pacific over the next five years at a cost of $73.8 billion, compared with 6,212 wells costing $59.3 billion over the past five years. Over the 2013-17 period, Asia Pacific deepwater (500-1,000 meters) expenditure is expected to increase by 46% from $4.2 billion to $6.1 billion, which will represent 33% of total MODU drilling costs in the region. In the same period, it’s expected there will be 854 deepwater subsea oil and gas wells globally, of which 574 will be in Asia Pacific, according to the study.

Asia Pacific is also expected to outpace the rest of the world in terms of absolute growth in terms of deepwater activity, with a 20% increase. Australia, Indonesia, China, India and Malaysia will account for 87% of projected deepwater activity in the region, with Australia at 22%, Indonesia and China each at 17%, India at 16% and Malaysia at 15%. Survey feedback singled out the South China Sea as having the greatest deepwater potential, but political uncertainty in the area is likely to affect how this plays out.

Shallow-water drilling is expected to rise too, albeit under more difficult conditions. Major technical challenges facing Asia Pacific drillers are fields with high CO2 and H2S content and HPHT reservoirs. More and higher-specification drilling equipment will be required in the region moving forward.

“Certain aspects of the required technology are already in production, like the seven-ram BOPs required in the GOM,” said Mike Brogan, vice president, technical director of DNV’s Asia Pacific and Middle East division. “The 20K drilling rig is the big question mark. As you increase the drilling pressure, the vessel becomes larger to house the topside equipment, like hoisting equipment and associated increase in deck load requirements, as well as new flexible hoses. 20K will happen – back in the ’80s it was the move from 10K to 15K and they said that could never be done – but it will take joint industry cooperation.”

In February, BP and Maersk Drilling announced a partnership agreement to develop conceptual engineering designs for deepwater drilling rigs for reservoirs up to 20,000 psi and 350°F. 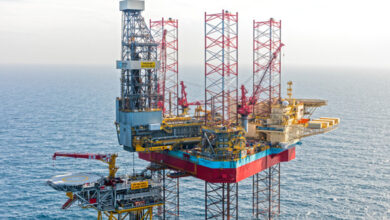