Passion for rigs drives his fight for innovation

In what David Reid calls the “inventing/creating world” in his head, there are definitive ideas about how things should be and strong opinions about right and wrong. Particularly when it comes to his passion for rigs, he knows what he believes and isn’t afraid to chase after innovative or risky concepts, and has been placed within a company and industry that helped him discover where his view could bring value.

Even in his early days in this industry – as technical assistant in a Varco repair shop – he discovered he had an “ability to cause change.” For example, by leading and implementing a critical assemblies exchange program and doing simple things to improve safety and processes, his team was able to significantly reduce the turnaround time for top-drive repairs in a downturn market.

Before long, he was requesting a transfer into sales but got turned down because he lacked an engineering background. “So I went off and started studying all the equipment, making sure I was technically much stronger,” he said.

He eventually got the chance to move into a quotes job at Varco, which gave him much more exposure to rigs and equipment, as well as direct customer contact. “Every time a sales guy wasn’t available to go do a call anywhere, I would offer to go. So I started getting into the customer’s office.”

By this point, the opinions he was forming about rig equipment was deepening, particularly when he couldn’t apply current machines or if they didn’t fit into applications. As Mr Reid describes it, he was in “a quotes job but actually doing a sales job and … ended up going to Norway and designing new equipment.”

One time, he actually took a design to someone in Varco’s senior management and was met with dismay: “He looked at me like, ‘Who are you and what are you doing inventing machines?’”

Shortly after that incident, Varco offered Mr Reid a job in its pipe-handling products division – which he found was not a successful business unit at the time. There was a concept called the PRS (pipe racking system) floating around, yet they were struggling to make the system work on rigs, from both cost and efficiency perspectives.

“So I found myself spending a couple of years working with the customers and the best sales and engineering team on the machine design to increase the value and have more functionality,” he said. It turned out to be a timely development for the mid-’90s, with the deepwater boom just starting to ramp up.

Soon, Mr Reid found himself going around the world explaining pipe-handling machines to drilling contractors and operators who were involved in building deepwater rigs. “It put me in a place where I became this expert in pipe handling and rig design.”

In just a couple of years, Varco went from selling four or five PRS units a year to 30 a year, an impressive achievement that helped put Mr Reid on the map.

But he was ready to move on. He was searching for something new and ended up in Varco’s Shaffer division. He had heard about a concept they had for a boltless-door BOP, which was more expensive than traditional BOPs but safer and lowered the cost of operations.

“There was a lot of resistance to change (within the well control industry),” he recalled. Yet he strongly believed in the benefits of the new BOP, and spent more than three years fully bringing it to market. The project was so successful that, at one point, the boltless design became the main BOP that Shaffer was manufacturing.

After that, Mr Reid once again decided to move onto a new project – rig packages. He found that a lack of internal alignment among product groups meant that “customers were struggling with seeing any value out of buying packages.”

He worked closely with Maersk to make the Maersk Innovator their first big win, where all the groups within Varco – solids control, well control, top drives, pipe handling, drawworks – pulled together to create a value sale. He later developed a focus on shipyard integration challenges, helping drive standard jackup packages that take risk and costs out of rig projects. “A lot of people wondered why the jackups came out so well. It was really a lack of variance between jobs,” he said.

During and after the merger of National Oilwell and Varco, Mr Reid was involved in several projects, including working with lawyers on anti-trust issues and establishing product line management across an expansive corporation.

He currently is NOV’s VP of E&P technology and business, responsible for developing corporate business interaction with strategic companies. His biggest goals are to reduce the nonproductive time of new technologies and using the market downturn as an advantage to prove out technologies of greater value. “A downturn is actually the best thing that can happen for technology. It forces you to work only on the things that really have value,” he said.

Mr Reid, who was recently elected VP of IADC’s drilling and well services division, adds that his work as chairman of the IADC Advanced Rig Technology Committee aligns well with his goals at NOV – through projects like a top drive survey to zero in on downtime problems. “Using IADC as the mechanism, we’ll connect people together so they can have good conversations about how to improve.” 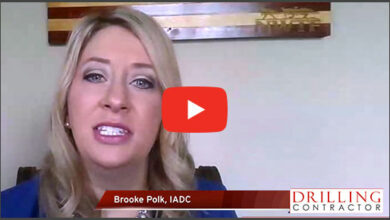