Mr Warriner had served as Senior VP at Seadrill since January 2019. Prior to Seadrill, he served as President at OilSERV Drilling Group and also worked for Schlumberger for over 15 years. He holds a BSc in engineering from the University of Calgary.

Mr Nelson joined Seadrill in 2011 and had served as COO since July 2015. He previously held various operational positions around the world for Transocean, and he holds a BSc in petroleum engineering from the Colorado School of Mines.

Following a seven-figure investment, Saipem has expanded its Saudi Arabian training facility in Dammam with a new DS:5000 drilling simulator, developed by Drilling Systems. The technology can be programmed with well-specific conditions and various scenarios, allowing Saipem’s personnel to simulate and practice advanced drilling operations such as well control, stuck pipe, jarring and managed pressure drilling in a safe and controlled environment.

Intebloc, a crane and lifting technology firm, has been awarded a three-year contract from Stena Drilling to provide the Rig-Ware data management system, with the goal of increasing control of vessel lifting equipment. Deployed across six of Stena Drilling’s assets in Europe, Africa and South America, Rig-Ware will allow onsite personnel to track and monitor the integrity and usage of all loose and fixed lifting equipment.

The award follows several trials of the technology on the Stena Spey and Stena IceMAX to demonstrate full functionality.

Archer has secured a two-year contract extension with a major North Sea operator for the provision of platform drilling operations and maintenance services on seven UK North Sea installations. The extension commenced on 1 November 2020, in direct continuation of the previous contract. Over the next two years, Archer will continue to deliver platform rig drilling operations, maintenance and intervention support activities, including the provision of well services and rental equipment. Further, Archer’s engineering team has been contracted to conduct a rig reactivation and provide brownfield engineering and operation preparational support to the other six assets.

Safe Influx announced it has been granted a patent in the UK covering its Automated Well Control technology. The patent recognizes the technology’s ability to detect the presence of a fluid influx condition in a wellbore, make a decision against criteria to shut-in, and then automatically initiate a well control protocol that results in the well being safely shut-in.

• Marc S. Noel has been promoted to VP – Sales & Marketing. He previously served as Director of Marketing.

Weir Oil & Gas Dubai has signed a five-year, $70 million contract with Thailand’s PTTEP to supply and install 1,800 sets of wellheads and trees in the Gulf of Thailand, leveraging its large Thai workforce in Bangkok, Songkhla and Sattahip.

MRDS, a drilling services firm based in Aberdeen, recently appointed Colin Whyte as Director for the Middle East and North Africa as part of its growth plans in the region.

Rival Downhole Tools has acquired the operating assets of Hunting Energy Services in exchange for Hunting securing a minority equity interest in Rival. “The addition of Hunting’s drilling tool business will enable us to not only serve the US but also accelerate market reach and product development, leaving us ideally placed for a series of international launches in 2021, starting with the Middle East,” said Neil Fletcher, Rival CEO.

DNV GL has published a recommended practice (RP) on how to build and quality-assure digital twins. The RP, developed with TechnipFMC, sets a benchmark for the sector’s varying approaches to building and operating the technology, guiding industry professionals through:

• Assessing whether a digital twin will deliver to stakeholders’ expectations from the inception of a project;

• Establishing confidence in the data and computational models that a digital twin runs on; and

• Evaluating an organization’s readiness to work with and evolve alongside a digital twin.

The RP provides guidance for digital twin developers, introduces a contractual reference between suppliers and users, and acts as a framework for verification and validation.

Bishop Lifting Products and SENAR have released an augmented reality (AR) sling and rigging hardware inspection and lifting training application for mobile devices. The AR simulator offers interactive safety inspection training both on individual pieces of rigging equipment and on proper use and attachment of rigging to various load types.

In one of the four scenarios, trainees walk around a life-size digital rack loaded with more than 2,000 lbs of rigging equipment, and they must identify the 40 flaws that could cause an accident. In another scenario, trainees inspect previously assembled rigging attached to a load before giving their sign-off for lifting.

The eLogs helps ship owners and operators reduce operational costs, simplify user data entry, enhance data reliability and improve regulatory compliance. NS eLogs can function as a standalone application or be integrated into the NS Enterprise suite. They will be accessible through a recently launched digital platform from ABS.

Weir Oil & Gas has announced the availability of the new Weir Latch Back Pressure Valve (LBPV) Drill-Thru System. The system, available with Weir’s Unitized Lock-Ring Wellhead and S-29 Lock-Ring Wellhead, provides greater efficiencies and a safer operating environment for drill-thru operations while the operator is drilling for 4 ½- or 5 ½-in. liner string.

Instead of a conventional thread profile, which can get damaged while running the drill bit through the wellhead, the new system uses a proprietary latch design. Weir’s design eliminates the threat of damage to the BPV, NPT from stuck drill bits, and potential pressure integrity issues.

D-Tech Rotary Steerable recently completed field trials and the commercialization of its Invictus next-generation rotary steerable tool (RST). The RST is a fully rotating push-the-bit tool, ruggedized for high vibration and shock. The self-contained system includes only 10 moving parts, which removes as many failure points as possible.

Because motor-assisted operations with higher bit speeds are a more common customer requirement to maximize ROP and push drilling efficiency, the tool’s speed was increased to 330 RPM. This further increases the tolerance of the system-to-bit speed variations caused by stick/slip events, as well as torsional oscillation. The tool also utilizes proprietary software to increase inclination and azimuthal control.

Ironclad has released the first glove to pass NFPA 2112:2018 certification for flash fire protection. Designed in partnership with DuPont Personal Protective Equipment, the Heatworx Heavy Duty FR glove features a molded silicone rubber palm and a shell made with 100% DuPont Kevlar. The glove can also handle hot items up to 600°F. 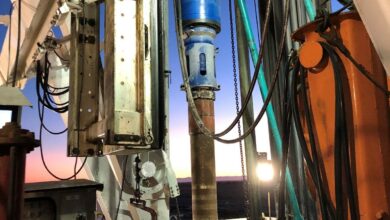 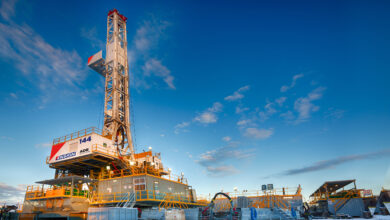 Formalizing communications could lead to better decisions at wellsite