The oil and gas industry is in the midst of a great opportunity – an opportunity to come out of this downturn a better and more innovative industry. Innovation tends to occur when activity is low or flat because the industry has a chance to slow down and catch its breath, said Bill Kline, who recently retired from ExxonMobil after 35 years in the industry. During a plenary session titled “Out with the Old, In with the New” held on 2 March a the 2016 IADC/SPE Drilling Conference in Fort Worth, Mr Kline referenced several innovations that emerged in the industry during the period of relatively low oil prices between the late 1980s and 2000.

“As you know that was a period of enormous innovation and progress in our industry,” he said. During that time, the industry moved into deepwater, learned to drill horizontally and set the stage for unconventional development.

To drive the same types of innovation now, companies must create a culture that encourages creativity, said Jon Crane, Vice President of Wells Technology Deployment and Technical Services for Shell. He recalled an experience in the Middle East in 1998, when the industry was in the midst of another downturn. On one project, due to pressures to manage costs, “we decided to get creative,” he said.

This creativity involved the decision to drop liners into the well, rather than running them in on drill pipe. This plan was kept secret from a top manager at first. When he found out, however, he was less upset about the plan itself than about the fact that his team was uncertain about management support of creative, out-of-the-box thinking. “My lesson from that period is one about the power to create within your own organization space for creativity and risk in order to improve the efficiency of the way you operate,” Mr Crane said.

In addition to approaching problems creatively, companies should take a systems approach to designing technology, he added. “It’s looking at what are you trying to achieve rather than the gadget you have in hand,” Mr Crane said. As an example, he noted that offshore cementing units often spend more time testing BOPs than they do actually cementing. At the same time, he added, while top drives were designed primarily for drilling, that accounts for only about 15% of what they do. “Using systems engineering to understand what your objective is, we can get a lot of insight in terms of improving efficiency,” he said.

Alongside a systems approach, zero-based engineering could increase the efficiency of the industry’s equipment, David Haas, Senior Manager of Enterprise Risk Services at Deloitte and Touche said. Often, the industry has a tendency to base new designs on what has previously been done, rather than building a product based on specific needs. Some components of the BOP, he said, have remained unchanged since the 1920s. “What I’d like to see is more engineering driven by requirements,” he said. “What are the requirements? What’s the goal?” A high-profile example of zero-based engineering is the iPad. Instead of simply building a better laptop, Apple introduced an entirely new concept, which has become incredibly popular.

Opportunities for innovation in the industry abound, Dr Jose Gutierrez, Director of Technology at Transocean, said. In many ways, the oil and gas industry has lagged behind other industries when it comes to embracing data-driven technologies. He pointed out that over a 46-year period ending in 2012, the offshore drilling industry filed approximately 36,000 patents. In comparison, the telecommunications industry filed the same number of patents in a single year. Further, the majority of the oil and gas patents were for mechanical inventions. Very few patents were filed for things like advanced simulators or condition-based monitoring equipment, which are common in other industries.

Dr Gutierrez said he interprets this to mean that there remains plenty of opportunities in our industry for more innovation. “The place we’re at, in a downturn, is the best moment for innovation because many are leaving for the exit, but the survivors are going to do it very well because the landscape is fruitful for taking advantage.” 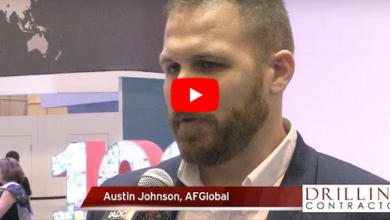