While this year’s downturn was fueled by COVID-19 and the Saudi/Russia price war, its origins likely began much earlier than this year. National Oilwell Varco’s (NOV) 2020 Drilling Survey identified three long-term contributing factors to the downturn: strong oil demand in the late 1990s and 2000s that encouraged E&P companies to boost shale production; the steady application of technologies that enabled the growth of shale production and supply; and the excessive debt that helped fuel that production growth.

Results from the survey were presented at the virtually held 2020 IADC Annual General Meeting on 6 November by Clay Williams, Chairman, President and CEO at NOV. The presentation was made in conjunction with the release of NOV’s annual rig census.

Mr Williams noted that an unprecedented demand shock coupled with oversupply proved disastrous for the industry. According to the survey, 52% of respondents said lowered demand due to the pandemic was the primary trigger that started the downturn, while 26% said it was an oversupply related to increased shale production, and 19% said a lack of capital discipline was the real trigger.

“In 2020, we find ourselves with a double whammy with both demand and supply, and that’s led to a historically difficult downturn,” he noted. “In my understanding, I don’t think this industry has ever seen a downturn in demand of 20% or more, which is what the shutdowns for the pandemic led to earlier this year. It’s certainly a recipe for the very, very difficult market that we find ourselves in.”

The survey also focused on the path to recovery from the downturn, and the opportunities for E&P and oilfield service companies to create additional value for themselves. The survey identified cash flow and capital discipline, as well as the creation of new business models that can better align the goals and incentives for operators and drilling contractors, as the top two levers for generating value.

In terms of the type of business model that could better align those goals, the survey respondents were not in agreement. Mr Williams said fewer people were sold on the importance of migrating to a turnkey business model over the traditional dayrate model. However, performance-based contracts could offer a happy medium for operators and contractors, he said.

Beyond profitability, another key industry focus mentioned in the survey was the reduction of people on the rig site, something Mr Williams noted as an issue of safety and operational efficiency. The survey respondents placed great importance on reevaluating processes and costs for added resiliency, particularly through the development of technology to improve safety alarms and controls on the rig. They also noted the importance of retrofitting and upgrading equipment, as well as deploying digital technology at the wellsite to enable greater automated capabilities. 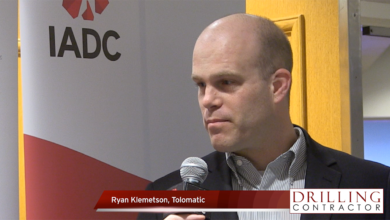