High levels of integration also enable small size, light weight of riser joint, which can be picked up and deployed in a single lift

Schlumberger has introduced the industry’s first complete deepwater MPD integrated solution that uses only one control system and requires fewer personnel to operate. The system features a riser joint – including a rotating control device (RCD), a slim-line annular blowout preventer and flow spool – that weighs just over 80,000 lb and measures 40-ft long, making it the shortest and lightest available on the market, according to Bas Liezenberg, DPM Deepwater Product Champion, M-I SWACO, a Schlumberger company. “Our goal was to reduce the total cost of ownership,” he said.

“Because of the joint’s reduced size and weight, it can be picked up and deployed in a single lift, halving the time associated with running MPD equipment into a riser,” Mr Liezenberg said. Schlumberger believes it has achieved a 75% reduction in flat time associated with deployment and retrieval, he added, much of it attributed to the ability for single-lift deployment and Schlumberger hook-up of riser control and flow lines.

The sealed rotating system (SRS) lands and is locked inside the RCD with retractable pistons. When the SRS is not installed and all pistons are retracted, the inside of the RCD is flush and, therefore, does not require a wear sleeve. This means when MPD operations have started, the bearing can be deployed in a single run, unlike other systems that require the wear sleeve to be removed before the bearing can be deployed. “This results in a single deployment run that reduces the flat time associated with this type of operation,” Mr Liezenberg explained.

Each component of the system is outfitted with sensors that continuously send data, such as wellbore pressure, temperature and flow in/out, back to the control system for processing. “It gives us the ability to set alarm windows around measured and/or calculated data points,” Mr Liezenberg explained. When a parameter is breached, the control system raises alarms to alert the operator of any abnormal conditions.

The MPD system is also scalable to fit specific well demands and can be run in manual or real-time hydraulic model-based mode, depending on the complexity of the well and/or operator needs.

The closed-loop MPD system was primarily installed to safely drill to TD offshore Guyana. The system was utilized on two well locations to drill 12 ¼-in. and 8 ½-in. sections in water depths up to 2,735 m. 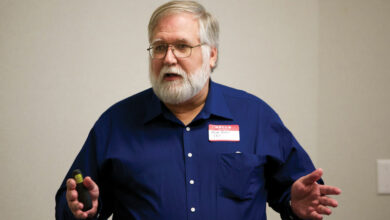