Petronas, ADNOC and Total all looking to digital technologies to cut costs out of traditional oil and gas projects while driving initiatives to lower emissions

The future of upstream oil and gas is looking more uncertain than ever, after experiencing one of its most volatile years in 2020.

For Petronas, that path necessitates conducting E&P activities in a more sustainable manner, said Adif Zulkifli, the company’s Executive Vice President and CEO of Upstream. “Going forward, given the need to be more sustainable and meet society’s expectation for lower emissions, we have to change the way we operate,” he said, citing the need to improve the efficiency of operating assets and better utilize existing equipment. “We have to operate in a manner where we achieve the lowest carbon footprint possible.”

The company has set a goal to be net-zero by 2050; it also aims to have zero venting by 2024 and zero flaring by 2030. A carbon capture and storage (CCS) project is being planned off the coast of Sarawak at the Kasawari development, Mr Zulkifli said, with first injection planned for 2025. This project is part of a larger strategy around CCS across depleted gas fields in Malaysia, as Petronas seeks opportunities to reduce and offset emissions.

For ADNOC, efforts to build a resilient upstream portfolio are focused on lowering costs and enhancing efficiency. Yaser Saeed Al Mazrouei, Executive Director of the Upstream Directorate for ADNOC, expressed confidence that the world will still need oil and gas for decades to come, despite current uncertainty in the market. He referenced the company’s decision, announced late last year, to increase its oil production capacity to 5 million bbl/day by 2030. “The global middle class and overall population will continue to grow,” he said, “and with this, energy demand, as well. While alternative energies will increase their share in the energy mix, we expect about 105 million barrels of global oil demand per day in 2030.”

The cost/efficiency focus will be particularly important to ADNOC’s drilling arm. After introducing integrated drilling services in 2018, ADNOC Drilling achieved 35% efficiency gains on wells employing the service. That resulted in nearly $200 million in savings, according to the company. A year-over-year efficiency increase of up to 10% is also expected moving forward, with up to 50% of its wells to be drilled under the integrated service framework.

At the same time, ADNOC has also set clear sustainability targets. This includes reducing greenhouse gas emissions intensity by 25% by 2030. Additionally, Mr Al Mazrouei said, the company has developed expertise with carbon capture, utilization and storage (CCUS) at its Al Reyadah facility; it already has the capacity to capture 800,000 tonnes of CO2 annually.

At Total, the company began a transformation years ago to pivot from being an oil and gas company to a wider-scope energy company. While the company remains committed to that transformation, it also realizes that there is no way to finance its new-energy ambition without the cash flow from the upstream division and oil production, said Arnaud Breuillac, President of Exploration & Production.

As such, the company plans to increase production from 3 million BOED in 2020 to 4 million BOED in 2030 – focusing on what Mr Breauillac called “value over volume” – with half of the increase coming from gas. Total will also focus on low breakeven projects, like its joint venture with ADNOC, while continuing to make investment decisions for viable offshore fields where financial and ESG objectives align.

CCS applications will also be an important part of Total’s portfolio. The challenge of reducing Scope 1 and Scope 2 emissions, Mr Breuillac said, is reducing the carbon intensity of the company’s own production and refining operations.  “We have to somehow find carbon storage capabilities,” he explained, “and part of it will come from CCS projects. Carbon capture and storage is very linked to E&P. If we look at the North Sea, we have the infrastructure with the pipelines, and we have large emitters of CO2 that could be interested in storing those emissions. We see an opportunity here.”

Total also plans to invest in nature-based solutions, focusing on preserving and restoring ecosystems that act as carbon sinks, such as forests.

The important role to be played by digital technologies was also underlined by all panelists. Mr Zulkifli said Petronas is leveraging digital technologies to drive real-time and remote operations. “What was normally a manned platform can now be unmanned, with only a few kits hooked up using all the IoT technologies you have,” he explained. “You cut out a lot of logistics and a lot of manpower that way, and you lower your costs.” Access to cloud-based systems is also speeding up data acquisition and analysis, making process-heavy exploration activities significantly more manageable and cost effective.

Mr Al Mazrouei referenced ADNOC’s announcement from late 2020 that the company had achieved $2 billion in cost savings over the past five years through advanced technologies and digitalization to enhance drilling efficiencies and optimize operations.

In November, ADNOC also announced it had completed the first phase of a large-scale predictive maintenance project, another part of the company’s digital acceleration program. Further, the company is investing in its Thamama Subsurface Collaboration Center to leverage data analytics.

If the upstream industry focuses on cost optimization, performance management and enhancing efficiencies, Mr Mazrouei added, there is still enormous potential for both conventional and unconventional oil and gas projects to be relevant and profitable. DC

Formalizing communications could lead to better decisions at wellsite 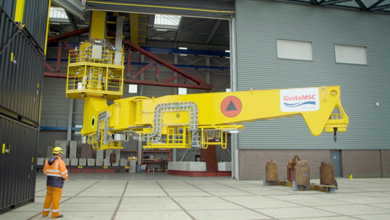