Back when hydrocarbon recovery meant drilling a vertical, straight, open-hole well, hardbanding was simply a matter of applying tungsten carbides to protect and extend the life of the drill pipe and collars. As wells have become deeper, longer and more deviated, what once was a relatively straightforward process has become considerably more complicated. Increased torque resulting from horizontal extended-reach drilling (ERD), the shift to cased holes and increased use of sophisticated downhole sensors have led to the development of wear-resistant alloys for casing-friendly products and non-magnetic drill pipe applications to increase the life of tubulars and tool joints.

More recently, pad drilling in onshore unconventional formations has made the process of hardbanding logistically challenging due to expedited drilling operations. “Ten years ago, the pipe could be inspected and re-hardbanded as the rig moved from one location to the next, a process that typically took several days,” said Mark Juckett, Hardbanding Product Line Manager for National Oilwell Varco (NOV) Tuboscope.

“With multiple wells now being drilled from a single pad and the capability of rigs to move much faster, we don’t have the luxury of several days,” he said. “Oftentimes, as the well is being spudded, the hardbanding crew works on the pipe and sends back enough footage to the drilling crew so they can continue drilling without interruption.”

Hardbanding, applied to all new drill pipe and connections, is reapplied with a frequency dependent on formation hardness, hole conditions and the aggressiveness and speed of the drilling operation, explained Steve Stefancic, Compliance Manager for Hardbanding Solutions by Postle Industries.

The company has seven technical centers, located in the US, Brazil, China, Scotland and Dubai. The process typically involves applying three bands, or inches, of hardbanding to the pipe. Proper pre-heating and slow-cooling to prevent cracking are critical. Reapplication of hardbanding without removing the old layer is a key objective.

A significant step-change was the development of casing-friendly hardbanding, necessitated by the shift from open-hole to cased-hole drilling, especially in unconventional plays. “The early form of hardbanding was done by welding mild steel wire with tungsten carbide on the outside of the pipe, which was effective in reducing tool joint wear but was damaging to casing,” Mr Stefancic said. “When the industry started designing cased holes in directional wellbores, we saw the need to develop a tungsten carbide-free product that was strong enough to provide wear resistance but without the properties that damage the casing.”

Eight years ago, Postle Industries introduced Duraband NC, a non-cracking, casing-friendly hardbanding product being used in harsh drilling environments, including H2S and high-pressure, high-temperature (HPHT) reservoirs. “Cracks introduce contamination to the hardware from the drilling fluid, which requires removal of the old layer of hardband and then reapplication, a process that can drive up the cost three or four times,” Mr Stefancic said. “Eliminating cracking allows hardbanding re-application after a simple cleaning of the outer diameter (OD) of the pipe.”

Duraband NC, which is being used to extend pipe wear in geothermal wells, can also help to eliminate spalling, which occurs when big chunks of the hardband layer come off, making reapplication difficult and costly. After the hardbanding is removed, the affected areas need to be rebuilt with a mild steel product, then machined down to enable application of a new layer of hardbanding.

Designed with a combination of properties that make it both hard and tough, “Duraband NC satisfies the operator’s goal of protecting the casing and the drilling contractor’s need to extend the life of the pipe in harsher conditions,” Mr Stefancic noted. In North Dakota’s Bakken play, characterized by long laterals and hard formations, Duraband hardbanded tool joints have been shown to exhibit only 50% wear after drilling 140,000 ft, he said. In Argentina, the product was applied to a string that drilled 39 wells for a total of 350,000 ft.

For less abrasive formations, casing-friendly Tuffband NC, also 100% non-cracking, is designed with alloys that make it easier to apply. Both products can be used as a matrix with tungsten carbide for open-hole wellbores.

Ultraband NM, the company’s newest hardbanding material, is designed with non-magnetic alloys that can be applied and re-applied directly to non-magnetic drill collars used in directional wells with downhole MWD/LWD tools. “You can easily destroy a $40,000 or $50,000 piece of pipe by putting standard hardband wire on a non-magnetic drill pipe,” Mr Stefancic said.

NOV Tuboscope’s TCS Titanium, a casing-friendly hardbanding, has been applied to more than 5 million tool joints of new and used drill pipe globally since it was introduced in 2004, Mr Juckett said. The product is resistant to cracking and spalling and provides durability in harsh environments, including H2S fields compared with other casing-friendly hardband products, he said. “We no longer apply tungsten on any heavy-weight drilling collars or tool joints unless the operator specifies the pipe is being used in an open-hole environment.”

For ERD wells, Tuboscope is seeing more casing-friendly hardbanding applications for bottomhole assembly components increasingly being positioned in cased sections higher in the drill string to provide added weight for pushing the pipe through the curve section and into the lateral, he noted.

The company’s TCS Non Mag hardbanding alloy is designed for non-magnetic chrome collars that house electronic steering tools, including rotary steerable systems, for ERD wells where the exact location of the bit and reservoir targeting are essential, Mr Juckett continued. “The hardbanding needs to be specially applied so that it does not interfere with or destroy the non-magnetic qualities of the metal. If too much heat is generated during the application process, the hardbanding creates magnetic ‘hot spots’ that can render the material unusable.”

Mr Juckett said today’s hardbanding is applied using gas metal arc welding methods, and the industry is pushing the limits of current technology for applying the high-alloy, casing-friendly hardbandings that are increasingly be used. Tuboscope is researching new hardbanding application methods, such as laser-transferred arc and plasma-transferred arc. “These advanced application methods can apply a hardband product that is more durable, at much lower temperatures, putting less stress on the pipe. However, such methods are much more expensive and can’t withstand the rigors of constant use in the field,” he noted. “Until a game-change occurs, we are continuing to push the envelope on weldability, durability and casing performance with the technologies currently available.” 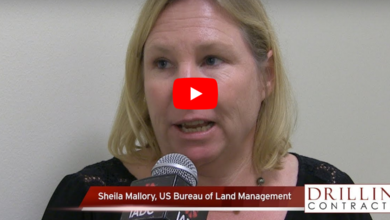 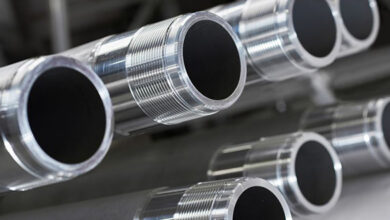