Eni has obtained a three-year extension to the exploration period of Block 15/06, located offshore Angola approximately 350 km northwest of Luanda and 130 km east of the town of Soyo.

The original exploration period expired in November 2014, and Eni requested an extension in order to complete the exploration activities already identified. The three-year plan envisages the drilling of three wells and 1,000 sq km of 3D seismic.

The extension also includes an area adjacent to block 15/06, which covers the discovery of Reco-Reco, estimated to have approximately 100 million bbl of oil in place.

On Block 15/06, acquired in 2006 following an international bid round, Eni has drilled 24 exploration and appraisal wells, discovering over 3 billion bbl of oil in place and 850 million bbl of reserves.

In related news, Eni also has announced the start-up of production from the Lucius Field in the deepwater Gulf of Mexico, 240 miles south of the Louisiana coast.

Lucius, which is in approximately 7,000 ft of water, has production secured through six subsea wells tied back to a moored production handling spar connected to the shore via dedicated oil and gas pipelines. The spar has a design capacity of 80,000 BOPD and 450 million cu ft of gas. Once all wells are ramped up, Eni’s share of the Lucius daily production is expected to be approximately 7,000 BOED.

The Lucius field was discovered in November 2009, and the subsequent development project was sanctioned in late 2011. Eni owns a working interest of 8.5% in the field operated by Anadarko. 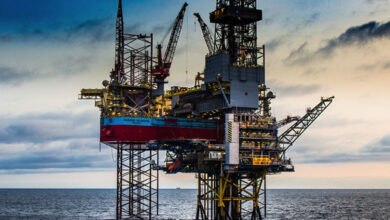