The oil and gas industry is entering a renaissance, but only if it can embrace a new paradigm of cooperation and technology, a panel of CEOs affirmed, addressing the International Petroleum Technology Conference (IPTC) in Beijing this week. IADC is a senior endorsing organization  for IPTC, which is hosted and sponsored by China National Petroleum Corp.

“Strong partnerships will be critical to make the transition to a new energy future,” contended Peter Voser, CEO of Royal Dutch Shell. “No one company can go it alone anymore.”  He pointed to the need for collaboration of industry with government and academia, as well as with companies outside the industry.

Globally, noted Mark Albers, ExxonMobil senior vice president, population growth and economic expansion will pump up energy demand. “Taken together, we predict that energy demand will rise by about 35% by 2040,” he said, adding that this exceeds the current energy demand of Latin America, Russia, India, Africa and the Middle East.

While a significant increase, this equates to just 1.3% annually over the 27-year time frame.

Within China alone, the potential prize is huge, as the Middle Kingdom strives to meet its own energy goals. According to Mr Voser, China’s energy consumption could double by 2030, assuming current economic trends.

Natural gas is a key ingredient. CNPC president Zhou Jiping said a “golden age” of natural gas is upon us, calling gas the “most abundant and reliable” fuel. Gas, he added, will in coming years elbow out competing sources to provide 10% of China’s energy needs, up from about 4%.

China apparently has the wherewithal to achieve these goals and more. Noted Shell’s Mr Voser, China’s unconventional reserves could overshadow those of the US by 50%, pending ongoing studies.

In addition, Saudi Aramco president/CEO Khalid Al-Falih said, China is on track to assume the mantle of the world’s largest energy importer. “The best days of our work with China are still to come.”

While unconventionals commanded the lion’s share of discussion and attention, Baker Hughes president/CEO Martin Craighead turned to a potentially even greater prize – ultra-deepwater, which he termed the “next deepwater frontier.”

“The prize at stake in this new frontier is enormous,” Mr Craighead said.

He pointed to 30 deepwater wells drilled in the South China Sea but stressed that the world’s fastest-growing, ultra-deepwater market is the US Gulf of Mexico, notably in the Lower Tertiary and Jurassic formations. Baker Hughes, Mr Craighead reported, is working with 10 customers who collectively plan on drilling some 300 ultra-deepwater Lower Tertiary wells over the next decade.

The challenges of developing these HTHP sands are enormous, demanding breakthroughs, particularly in completions and production. With temperatures of 350°F to 400°F and pressures exceeding 30,000 psi, the Lower Tertiary is a consolidated formation, he said. This will demand huge stimulation efforts across three to four zones totaling some 3,000 ft of sand. Each zone, Mr Craighead said, can require half a million pounds of proppant.

“As a result, every component in these systems must be designed to a whole new level of reliability,” Mr Craighead said. Systems must last for a decade, he explained.

The ultra-deep will demand electric submersible pumps that sit idle at extreme depths for as much as five years before activation. “Once it’s turned on, it better work and work for a long time,” Mr Craighead said. 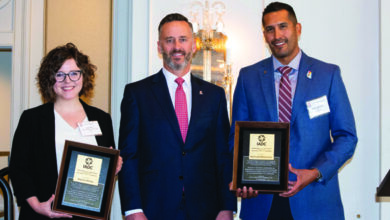