CASING DRILLING has been used in numerous difficult wells and to drill through troublesome well sections that would not have been possible with conventional drilling techniques. The process eliminates tripping of the drill string and requires only a Range II rig with a single mast. In addition, by reducing or eliminating lost-circulation events, cost savings are realized in the reduced amount of drilling fluid and LCM material required, in turn reducing the environmental impact of the operation.

Casing Drilling also has shown to result in significantly better borehole quality and reduced reservoir damage, resulting in improved cement jobs, sometimes with significantly reduced cement volumes and reduced risk of wellbore instability. The plastering effect resulting from Casing Drilling can enhance reservoir productivity by reducing or eliminating fluid losses to the producing horizon, as well as to mitigate mud invasion through permeability. In one case study below, the plastering effect, combined with LCM, reduced significant mud losses during drilling of the 9 5/8-in. section to virtually zero.

The plastering effect results from the smooth, continuous contact of the casing as it rotates against the wellbore wall.  This action packs the drilled solids into the porous and permeable portions of the formation as the cuttings are carried up the annulus by the drilling fluid.

TESCO has invested heavily in Casing Drilling technology and tools to provide more versatility to Casing Drilling services. These include a drill lock assembly (DLA) that secures the bottomhole assembly (BHA) to the casing. Specially designed underreamers result in higher rates of penetration (ROP) and provide a reliable collapse mechanism for tripping. Additionally, the company has utilized the same Casing Drive System for both running casing and casing while drilling. This adds the flexibility to use all functions of the top drive (150+ RPM rotation at 40,000 ft-lbs of torque, circulation, weight transfer) on a casing running job to ensure that casing strings can be successfully run in troublesome conventional wells.

Following are several case studies that illustrate the advantages of the Casing Drilling process to mitigate or eliminate obstacles to successful drilling and production programs. In one case study, the company proved the directional drilling capability of Casing Drilling with 9 5/8-in. casing.

An operator in central Oklahoma experienced significant fluid losses during drilling of the 9 5/8-in. section. Not only was there fluid loss in each well, but there were significant problems successfully running casing. In some cases, the well would have to be redrilled. TESCO was brought in to try to mitigate the problem and set casing.

The same mix of lost-circulation material (LCM) that the operator used in earlier wells was utilized by TESCO to help cure the losses in subsequent wells. The LCM was ineffective in curing the loss in earlier wells but was highly effective when used with the Casing Drilling process – because the plastering effect inherent in Casing Drilling aided in controlling the losses. It was suspected that the fracture pore space that the operator was trying to fill with LCM was too large to be sealed with only the LCM or only the smear from the plastering effect. What became the successful method to mitigate or eliminate the fluid losses was to augment sealing the pore spaces with LCM with the plastering effect.

Pan American Energy’s (PAE) Cerro Dragon field is comprised of several districts with specific characteristics of a common problem: nonproductive time related to both lost circulation and highly damaged reservoirs. TESCO’s objective was to illustrate to PAE the value of Casing Drilling and what it can do to increase production in a field with downhole problems mostly related to highly depleted reservoirs, and a well section comprised of multiple producing layers, many of which are exposed to water injection recovery processes.

A challenge with PAE’s mature field is lost circulation as new drilling progressed beyond depleted layers toward the new producing strata. TESCO, using its Casing Drilling and bit release tool (BRT), successfully drilled through the multiple depleted formations without getting differentially stuck. The company was able to demonstrate that the plastering effect actually helped to seal some of the depleted zones. This allowed the company to successfully reach its target without ruining the zone or damaging it by contaminating the commingled production zones with drilling muds.

PAE’s reservoir engineers immediately saw the importance of identifying a determined numbers of wells to evaluate this technology. The program was identified to enhance productivity rather than as a drilling project. The wells are known as low-cost wells; however, it was key to evaluate the entire process (drilling, termination and production) where TESCO would bring Casing Drilling technology for the first part of the process (drilling), utilizing the BRT.

The BRT connects the casing to the bit with API box connections on bottom and casing connections on top and allows the operator to continue using the drill bit of his choice. Spiral stabilizer blades were used to create a packed hole rotary assembly in order to maintain directional control of the assembly during drilling. The BRT provides a mechanism for removing the bit and lower assembly to open the bottom of the casing. This allows the operator to cement open ended as opposed to through the bit.

One of the key factors in putting together a process was inspection of the available rigs and the feasibility of installing top drives, and training PAE personnel. The second task was to study and analyze the drillability of the formation, which had to be drilled in one run. Five wells were chosen by PAE, with an increasing level of difficulty.

The five wells were drilled as planned with an average depth of 2,150 m. The objective was the 5 ½-in. production string, planned from 800 m to TD. As shown in the graph above, the reduction in numbers of hours per 100 m drilled with Casing Drilling compared with PAE’s conventional wells in the Cerro Dragon field was dramatic as a typical learning curve process, where the client chose to drill the most difficult wells at the end of the program.

The last two wells (red bars) were drilled in the trouble zone area, where new injection wells were drilled to replace old wells. This replacement program had been postponed for more than three years due to trouble zones.

Other value-added results from the technology has been the quality of wells. The first three wells in the area of Cerro Dragon resulted in highly visible and innovative results. For example, for the first time in many years, one of the wells did not require fracturing. Another well has a very low skin factor as a productive indicator.

There still is room for improvement, especially associated with ROP. PAE and TESCO have begun negotiating a second phase due to the operational and productive results achieved from the first five wells.

An operator drilling offshore Indonesia had been using TESCO’s Casing Drilling services for numerous wells. In a well drilled last February, a key objective was to drill the entire 13 3/8-in. casing section to TD in one run, which was accomplished successfully. The result was savings for the operator. Importantly, the well showed that 20-in. casing could be eliminated on subsequent wells, saving the operator as much as $500,000 on each well, eventually totaling $10 million for the complete development project.

The directional capabilities of the 13 3/8-in. Casing Drilling assembly were in a commercial setting for the first time in the Asia Pacific region with this well. The well proved the ability to directionally steer with 13 3/8-in. casing. The directional BHA consisted of a 9 5/8-in. high-torque, low speed motor set with a 1.15° bend. The 13 3/8-in. directional section dropped inclination from 8°, held tangent below 4° and built to 5° at TD. There were 10 slide intervals for a total of 219 ft, or about 9%, of the section. Rotating ROP averaged 75 ft/hr while sliding ROP averaged 36 ft/hr.

Highlights of the Casing Drilling run was the significantly shorter time to make up the BHA, from 8 hrs on the previous well to only 3 hrs on the subject well. The 2,334 ft 13 3/8-in. section was casing drilled at an average ROP of 59 ft/hr, with instantaneous ROPs of more than 200 ft/hr.

The 13 3/8-in. internal BHA was pre-made in TESCO’s shop prior to being shipped offshore. After drilling out the cement using the 17 ½-in. conventional BHA, the 12 ¼-in. directional Casing Drilling assembly was made up. Total time to make up the 13 3/8-in. BHA for the well in question was 3 hrs, a savings of 5 hrs compared with the initial implementation on the previous well. Time constraints on mobilizing the Casing Drilling equipment did not allow for the internal BHA to be pre-loaded and torqued prior to shipping offshore. This procedure will be performed on all future operations as it improves safety and reduces rig time significantly.

The up, down and rotating drags trended well over the 2,334 ft interval that was casing drilled. The section was drilled with seawater, where total losses were experienced at 1,800 ft. Losses of 14,000-27,000 bbl/day were experienced while Casing Drilling. However, no hole cleaning issues were experienced. Forty barrel Hi-Vis sweeps were pumped every two casing joints.

New 13-mm dual cutter arms were developed for the project specifically targeted to drill the harder formation and complete the 13 3/8-in. section in one run. A total of 2,334 ft of 13 3/8-in. x 17 ½-in. hole was drilled at an average ROP of 59 ft/hr. Initial penetration rates through the formation were above 250 ft/hr. On-bottom hours were 15.75, resulting in an on-bottom ROP of 148 ft/hr for the section.

Seismic-while-drilling: Where is it heading? 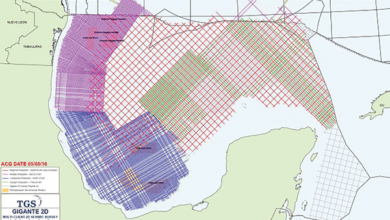 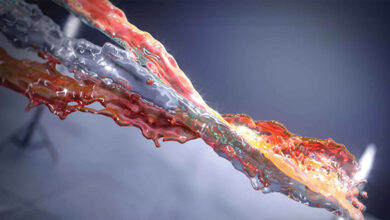