A project to measure and improve land rig moves identified four key fundamentals and their integration as the path to improved efficiency: streamlined procedures, intelligent rig design, maximum equipment utilization and effective communication. In a presentation at the 2014 IADC/SPE Drilling Conference, Thad Dunham, Process Engineer, Rig Solutions for National Oilwell Varco (NOV), noted that the project initially began with a narrower scope but quickly expanded when the potential for improvements became obvious. “The original objective was to go out, work with the contractors and the operators doing the job, figure out how the rigs are actually being moved and see if we can come up with any design improvements based on what we’re seeing in the field.”

The team began by mapping out the entire rig move process through detailed observations of actual rig moves and the use of time-lapse video technology. Using the data that was collected, the team then developed a baseline rig move using a scheduling software. The software allows for different scenarios to be input so the team can see how the entire process is impacted, Mr Dunham explained.

“This is also important because you can track the utilization of the equipment that’s moving your rig. We use this as a way to determine, for example, do you need two cranes? Do you need one crane? If you’re using two, are you maximizing the use of your second crane? It’s fairly simple stuff, but in order to quantify it and see it on paper, this system was very important.”

Once the initial baseline rig move, which identified a total 208 steps, was established, NOV partnered with a drilling contractor to use a test rig to track its moves and implement changes. Rig release-to-spud time at the beginning of the project averaged 4.42 days. After changes were implemented, that number consistently went down to less than four days, Mr Dunham said.

Improvements made to streamline procedures included creating simple timelines, interactive procedures and checklists. “It is important to have timelines and simple documents that people in the field can easily read,” Mr Dunham said. “Your rig design is also very important. The mast and sub obviously are the most critical, and then there are cable management, the size of the loads, the number of the loads it takes to move the rig. A lot of little things add up to a move taking five days versus taking four days.”

In order to maximize the use of equipment, detailed and accurate load plans must be in place, as well as driver checklists. “This is a real basic example, but as far as the number of trucks that you are using to move a rig, does everybody know how many trucks that takes? How long is the move? How many miles is it? If it’s 60 miles, you might need more trucks than if it’s just 20 miles. Do you have all that lined up from the beginning?” The ultimate goal is to set up a move plan where the equipment that can do the most work is actually working the most.

Effective communication is the fourth fundamental component of an efficient rig move, Mr Dunham said. The study suggested planning meetings should be held days prior to the rig move. Transportation routes and potential road hazards should be coordinated with the trucking company. Further, the rig manager should be in constant contact with all parties and be prepared to monitor the move.

Finally, when the rig move is done, capturing lessons learned is also paramount. “Talking about what we’ve learned and what we can do better – I can honestly say this is the most important thing, as far as moving the rig goes,” Mr Dunham said.

Looking to the future, he noted the significant potential this type of approach can have for pad-to-pad rig moves on an industrywide basis. “And, lastly, simulation is something that we are currently working on at the moment to incorporate into the process improvement,” he said. 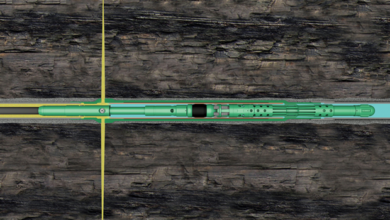