A few weeks ago, it was as if the oil & gas industry was staring into a “dimensionless black hole,” but now it is traveling through a long, dark tunnel with a “small light” at the end, according to Mark Corrigan, Schlumberger’s president for oilfield services covering Europe, Africa and the Caspian.

Delivering the second-day keynote at the IADC World Drilling 2009 Conference in Dublin on 18 June, he said that it was right for companies to batten down the hatches in order to ride out the current economic storm. However, it was essential to plan for better times ahead, perhaps around 2011 when supply and demand for petroleum appears likely to come back into reasonable balance.

Mr Corrigan said that, while some in the industry appear to regard the current upstream downturn as relatively moderate … witness the way in which the deepwater/ultra-deepwater sector remains relatively unscathed … he said this was most certainly not the case for independents and especially in North America, where the land rig count has lately more than halved.

“The work (on US land) is so service-intensive that this has serious global consequences for land drillers and service companies. Internally (at Schlumberger), we have a saying that whenever North America sneezes, the rest of the world catches a cold,” he said.

“This slowdown in North America generates huge excess capacity and has the knock-on effect of making everyone associated with it extremely hungry.

“I can assure you that for anybody associated with North America, be it a land drilling company or a service company, this is not a slight downturn; this is a major crisis.

“In this scenario, the industry, led by the operators, must certainly roll back inflation … as much inflation as possible, and an element of that is certainly very healthy.

“It forces us all to cut out the fat that typically accumulates after extended periods of growth and refocus on efficiency and quality that, quite honestly, took a back stage when demand so far outstretched supply.”

Mr Corrigan said it was “interesting” to observe how the different customers have been handling the current situation. Some have been doing it with a clear eye on the future, applying strong but “appropriate” pressure in order to get costs down, and do it cooperatively.

He attacked those with a short-term view and who were using “quite provocative” procurement practises to squeeze the maximum out of the service sector and to exploit the hunger now being felt.

“Market forces will of course rule, and we (Schlumberger) will do the necessary to sustain our market leadership position.

“However, which of these approaches applies will inevitably have consequences on the relationship and our ability to best meet our customers’ requirements when it does turn around.”

Mr Corrigan spoke of a real dilemma for the service sector and that it wanted, indeed needed, to hold onto its competencies.

“This is not self-serving; the operators will need a robust service sector when they go back to growth. The problem is that with such a significant drop in activity, we have absolutely zero choice but to dramatically cut costs.”

At ExxonMobil, it’s not about the numbers; it’s about nobody getting hurt 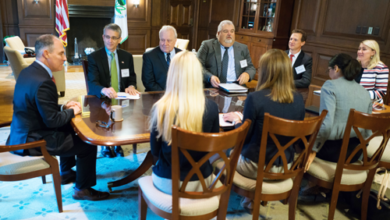