Another day, another deepwater moratorium? Seems likely. Although US District Judge Martin Feldman of New Orleans issued an injunction lifting the drilling ban on 22 June, Secretary of the Interior Ken Salazar has vowed to reinstate the moratorium. The original moratorium applied to all Gulf of Mexico drilling in water depths exceeding 500 ft, including sidetracks. Workover operations may continue.

Recommendations, rulings and clarifications are available on IADC’s Offshore GOM Reform website at http://www.iadc.org/Offshore_GOM_Reform. The site also includes model letters to US congressmen and senators stating support for a resumption of offshore drilling, as well as news from IADC and other sources.

The Secretary made his intention clear in a meeting with oil industry representatives on 28 June. Department of Interior (DOI) officials further indicated that, irrespective of conformance with new drilling safety regulations, deepwater permits might not be approved until operators assure the government that adequate oil-spill plans are in place.

The 5th US Circuit Court of Appeals set 8 July to hear an appeal by DOI. IADC has filed an amicus brief supporting the original suit opposing the moratorium.

Within days of the 20 April explosion and fire on the Macondo prospect, in which 11 lives were lost, the DOI paused all drilling, except for sidetracks and certain other exceptions, in the Gulf of Mexico for 30 days pending development of recommendations for safer drilling to President Obama.

The six-month deepwater drilling moratorium, ending all drilling in water depths exceeding 500 ft, was imposed on 28 May. (See Page 20 for more on the role of IADC and industry.)

The emphasis is shifting from improving well-control practices to controlling blowouts and preparation and execution of spill clean-up and remediation. BOE set forth specific blowout control requirements in an 18 June Notice to Lessees (NTL No. 2010-N06, available on IADC’s Offshore GOM Reform website).

•  Blowout scenario predicting the highest volume of liquid hydrocarbons that would be released; the potential for the well to bridge over; likelihood of successful surface intervention; availability of a rig to drill a relief well; and rig package constraints;

•  Description of assumptions and calculations used to estimate flow volume in a worst-case discharge scenario;

•  Description of measures to reduce the likelihood of a blowout and to conduct effective early intervention, including contingency for relief wells.

Meanwhile, the government has adopted a trickle-down approach to granting permits for shallow-water drilling. Late in the week of 21 June, the first shallow-water permit was issued since drilling was paused on 28 May and since the deepwater moratorium was imposed.

Drilling in less than 500 ft of water was excluded from the deepwater moratorium largely due to the efforts of the Shallow Water Coalition and IADC.

“Shallow-water drilling operations and production activity in both deep and shallow waters are not under a moratorium and will continue, provided they are in compliance with the new safety requirements,” an 8 June DOI news release reads.

Still, the few permits issued in the days following the deepwater suspension were almost immediately rescinded.

The permit approved late in the week of 25 June by the new Bureau of Ocean Energy (BOE), successor to the US Minerals Management Service (MMS), went to Bannon Energy. Bannon had received one of the permits issued previously. “They had to do a lot,” one industry source commented dryly when asked what steps the operator took to gain final approval.

Bannon contracted Seahawk Drilling for the well. At press time, the rig was waiting on weather as Hurricane Alex passed through the western GOM.

As of 24 June, 18 more jackups were waiting on permits. Crews of at least two jackups have been laid off.

The length of the deepwater moratorium will doubtlessly influence the vigor of the US offshore deepwater drilling industry. The longer it lingers, the more jobs, revenue and production will be lost.

Irrespective of time span, however, it appears clear that sea changes to offshore well design, equipment and operations are in the offing.

On 8 June, the MMS issued specific directives for both shallow and deepwater drilling. These requirements, in NTL No. 2010-N05 (available on IADC’s website), flesh out recommendations of the 27 May DOI report to President Obama, “Increased Safety Measures for Energy Development on the Outer Continental Shelf.”

An important point is that BOPs must be inspected and verified independently for each well, rather than per rig, according to a clarification made by MMS during June. “However,” the clarification reads, “the operator can verify multiple wells at a given location where all variables are the same (i.e., verify all equipment at one time, and the operator will then submit the individual verifications with each applicable well permit).”

Key elements of the 8 June NTL include:

•  Examined all well control equipment and ensured that BOPs can properly perform, that ROV hot stabs are function-tested and can actuate the BOP;

•  Reviewed all drilling, casing, cementing, well abandonment, completion and workover practices to ensure well control is not compromised at any point;

•  Ensured that all operations personnel are properly trained and can perform during both normal drilling and emergency well control operations.

The deadline for these CEO-signed certifications was 28 June 2010.

Operators who used a subsea BOP stack or a surface stack from a floating MODU were required by 17 June to submit:

•  BOP and well control system test results, including any anomalies;

The last three items were apparently required retroactively, as the NTL states that data for those items is for the time the operator “has had the rig under contract, not to exceed 3 years.”

Jackups are excluded from this requirement.

An independent third party must conduct a detailed one-time physical inspection to certify that the BOP will operate as originally designed and that BOP modifications or upgrades have not compromised the unit’s operation or design.

Rigs or platforms conducting workover, completion or abandonment activities (which were not suspended, by the way) must complete this review before beginning another well.

An “independent third party” is defined as a “technical classification society, API-licensed manufacturing, inspection or certification firm or licensed professional engineering firm,” according to clarification made by the MMS. The firm must be well capitalized, bonded or insured, with no record of violations. Further, a representative of MMS (presumably BOE now) must be allowed access to the test facility.

The operator must document BOP maintenance according to regulations, with records available to the government upon request.

BOP stacks must be compatible with the specific well location, well design and well execution plan. A third party is required to ensure the BOP stack is designed for the specific rig equipment and well design; has not been compromised or damaged; and will operate in the conditions in which it will be used.

According to an MMS clarification, BOP compatibility verification constitutes a review of documentation and records, rather than a physical inspection.

All subsea BOP stacks “must have a secondary control system with ROV intervention capabilities, including the ability to close one set of blind-shear rams and one set of pipe rams,” the NTL states. Subsea systems must also have emergency shut-in capability in case power is lost or an unplanned disconnect occurs. This requires both a “deadman system and an auto-shear system.”

“In addition to these requirements, you may use an acoustic system to activate your BOP stack in case of an emergency,” the NTL continues.

Numerous press reports have implied that acoustic systems are commonly required outside the US. In fact, no nation actually requires this equipment. Acoustic systems are one means of complying with Norwegian guidelines for secondary control systems, and are used by most if not all contractors operating there. However, Norwegian regulations do not require use of acoustic systems. Petrobras contractually requires this equipment on dynamically positioned rigs operating in Brazil, but regulation does not mandate acoustic BOP systems.

Hot stabs used to interface with the ROV intervention panel must be function-tested. The test must occur at the same rate and pressure of the ROV pump.

The operator must provide information from a third party showing that blind-shear rams can shear the pipe under maximum anticipated surface pressure.

Should blind-shear or casing-shear rams be activated in a well-control situation and pipe or casing was sheared, the BOP and components must be physically inspected and tested.

All well-casing designs and cementing program and procedures must be certified by a professional engineer to:

•  Ensure casing hanger latching mechanisms or lock-down mechanisms are engaged when the casing is installed in the subsea wellhead;

•  Verify the installation of dual mechanical barriers, in addition to cement.

Steve Kropla and Alan Spackman, IADC, contributed to this article.

Macondo by the numbers: Below are some of the less well-reported numbers related to the Macondo blowout, in the larger context of overall GOM operations and US politics.

24 – Senate bills as of 25 June in response to Macondo (US government, IADC)

17 – House bills as of 25 June in response to Macondo (US government, IADC)

10 – Senate hearings related to Macondo as of  25 June (US government, IADC)

14 – House hearings related to Macondo as of 25 June (US government, IADC)

2500 – US deepwater wells, at a minimum (US Minerals Management Service)

25.5 – Total barrels of oil spilled in the 3 incidents cited above (US MMS)

IADC collaborating with members, government to get all rigs back to work in Gulf of Mexico 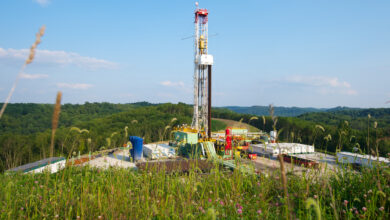 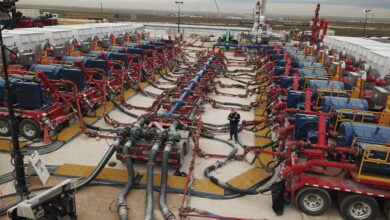 Are electrically powered fleets the future of fracking?