Just six years ago, PV Drilling – or Petrovietnam Drilling and Well Services Corp – was a company providing small-scale services such as drilling tool rental and oil spill response. By March 2007, it had taken delivery of its first jackup rig – not only the first offshore rig for PV Drilling but also the first ever offshore rig for any Vietnam-based drilling contractor.

Since then, the company has ordered two more jackups from the Keppel FELS shipyard in Singapore. Both are scheduled for delivery in 2009.

“It’s been a big challenge for us, bringing a new rig into operation,” said Do Van Khanh, president and CEO of PV Drilling. “We had some software problems at the beginning with the interface between equipment from different vendors. But the problems have been fixed, and our rig has been working very well.”

Soco announced in mid-June that first oil was scheduled to begin there before the end of July. The topsides and modules have been installed on the unmanned wellhead platform, and PVD-1 has moved there to begin tie-back and completion of the three pre-drilled development wells. The rig will then resume the development well drilling program.

According to Mr Khanh, operations on the PVD-1 have been so smooth and successful – “Our rig has worked for the last six months with more than 99% operating time,” he said – that the company decided to order a second jackup soon after PVD-1’s delivery in 2007, then a third by early 2008.

“We also saw that there are a lot of opportunities in the market in Vietnam, especially for jackup rigs,” he said, explaining that the company wanted to be ready to share in that market’s growth.

Although PV Drilling is considering the possibility of marketing its third rig outside of Vietnam, Mr Khanh said that’s still far from certain. “Our priority will be Vietnam. The Vietnamese jackup market is quite good, with a lot of new discoveries recently. I think there will be about 50-60 wells a year drilled in Vietnam. There is a lot of potential here.”

The Ca Ngu Vang field where the PVD-1 was drilling is located in the prolific Cuu Long Basin. That’s also where the Bach Ho field, one of Vietnam’s largest, is located and where several discoveries have been announced in the last couple of years by companies such as Thang Long JOC. This joint venture between Petrovietnam and Talisman recently announced two discoveries in Block 15-2/01 and plans to drill four wildcat exploration wells in 2008.

Lam Son JOC, a joint venture between Petrovietnam and Petronas, also recently announced a discovery at the Dong Do field in the same basin.

PV Drilling’s two jackups still under construction in Singapore are bigger than its first unit, which could operate in up to 300 ft of water, Mr Khanh noted. PVD-2 and PVD-3 will be 375-ft jackups capable of drilling up to 30,000 ft. They also will have 15,000-psi BOPs rather than the 10,000-psi unit on the first rig. The bigger-spec rigs and equipment were ordered with an eye towards the country’s deeper waters, he explained.

Although a 300-ft jackup can work in the majority of Vietnam’s production fields, recent discoveries in slightly deeper waters makes PV Drilling believe that 375-ft jackups could come in handy soon. The company also has run into pressures higher than 10,000 psi while drilling for its customers, so decided the 15,000-psi BOP would be necessary in the long run.

“We felt it was better to put in the investment now rather than doing upgrades later,” Mr Khanh said. PVD-1 cost $115 million to build, while PVD-2 cost $191 million and PVD-3 went up to $205 million.

The company has no plans right now for any additional rigs beyond the two still under construction, he said. On top of the rig business, PV Drilling still provides the same smaller-scale services it did when the company was first established, plus more highly technical services such as mud logging, production wireline logging and drilling services.  “We have three rigs, and so far we’re doing well. We’re going to make sure those three rigs continue to work well. That’s our plan for the next five years,” he said.

PV Drilling also owns one land rig built in China. The company will continue to operate that rig, now in Algeria, though Mr Khanh said there are no plans to build new land rigs. “Our focus is offshore,” he said.

As Vietnam steps up its offshore drilling activities in the next years, Mr Khanh mentioned that he would love to see underbalanced drilling applied in the country. Production in Vietnam, such as in the Cuu Long Basin, often come from fractured basement reservoirs, and permeability can be very low in some areas.

He also would like to see oil-based mud (OBM) be used more often to achieve less damage to reservoirs, compared with water-based mud. Due to Vietnam’s environmental restrictions and the more expensive cuttings treatment and disposal required, OBM is not frequently used there. A better onshore cuttings treatment system could help the industry make better use of OBMs, he said.

Like the rest of the world, Vietnam’s drilling industry is being challenged by the rise in operating costs and a people shortage. That shortage is especially critical for positions such as driller, rig mechanic, electrician and OIM, Mr Khanh pointed out. For its part, PV Drilling trains about 2,000 people a year in the PVD Training Center, located in the oilfield city of Vung Tau. It provides internal training for drilling crews, as well as industry-wide training in welding, rigging, scaffolding, etc. The center even holds offshore survival courses.
Another potential challenge that could confront the global drilling industry is the number of offshore rigs, especially jackups, being built. Once the newbuilds are out, there will be significantly more jackups competing for work than today.

Mr Khanh said this could grow into a problem, but he added that he is optimistic about rig demand in the coming years. Oil companies worldwide are drilling more wells than they planned before, he said, which should provide plenty of work for jackups.

“And Vietnam will be quite busy for the next few years. Of course, that will depend on the success of exploration and if we have new discoveries. But if discoveries are made, it could mean a big oilfield.”

The country also carries significant untapped potential in deepwater, he pointed out. “Vietnam has a long coastline with a lot of areas not yet explored. So far we have drilled in maybe 1,000 ft or less of water, but we have waters up to 10,000 ft deep. There is still a lot of open areas.”

Gulf of Thailand drilling/completion both high tech and high volume, with HSE as core value 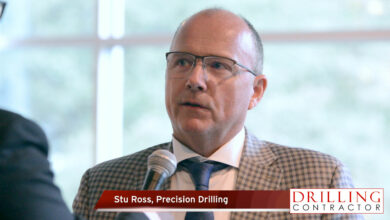