Increasing the presence of women in the C-suites of E&P companies is an undertaking that requires work both by individual women, as well as by company leadership, Christina Sistrunk, VP Arctic Capability, Shell Upstream Americas, said at OTC on 4 May in Houston. “I do very much think this can’t be seen as a women’s issue only,” Ms Sistrunk said during the Women in the Industry Sharing Experiences (WISE) panel. Ms Sistrunk was joined on the panel by Gabriela Arias, a chemical engineer at Halliburton; Angela Knight, Global Diversity Leader, GE Oil and Gas; and June Ressler, CEO of Cenergy. Katie Mehnert, CEO of PinkPetro, moderated the discussion. Each participant discussed barriers that women face in the industry, as well as potential solutions to breaking down those barriers, including networking and outreach.

One barrier that women frequently face in this industry is defining success by other people’s standards, Ms Sistrunk said. “Nobody has a right to define what success is for you,” she noted. “It’s critically important that you have a vision for yourself, because nobody else knows where your passion is.”

Even when women know what the next step in their career needs to be, they are often more hesitant to ask for raises or promotions than men, Ms Ressler added. “For some reason, women don’t feel like they’re worthy of a raise or they’re doing a good enough job,” she said. “Always feel good about yourselves and ask for that raise, because you deserve it.”

Another issue women may face in the oil and gas industry is feeling like they’re alone or outnumbered. Ms Arias recalled that when she first joined Halliburton as a field engineer, she was the only woman on a team with 25 men. When the company asked Ms Arias to participate in an ad campaign highlighting women in the industry, it gave her an opportunity to share her experience. Feedback on the experience she shared as part of that campaign was tremendous, she recalled. “I had a lot of other women that were just hired on, not just at Halliburton but at other oil and gas companies, who came up to me and said they were really encouraged by my story.”

Indeed, sharing stories, experiences and career advice through professional networks is one of the key ways in which women can advance into leadership roles in the industry, the panelists agreed.

Shell first created its employee network program more than 20 years ago. The company has two career networks for women, one targeting women early in their careers and the other targeting those who are poised to move into senior management roles, Ms Sistrunk said. These networks hold workshops that provide women with skills training and an environment in which they can share ideas. On the flip side, these networks also help senior management by giving them a clear idea of women’s needs in their organization. “It also gives people a safe place to talk about what they’re really experiencing, which then gives senior leadership really valuable insights into what we need to be working on as well,” she said.

While Ms Arias is active in Halliburton’s Women Sharing Excellence program, which was started in 2012, she said programs outside of her company have also been valuable tools for her professional development. These include the Society of Women Engineers and SPE. She also encouraged women whose companies lack women’s network to take the lead in starting one.

Ms Ressler also noted that she is a member of Women Impacting Public Policy (WIPP), which serves as a voice for women on Capitol Hill. Through her involvement in that organization, she was appointed to the National Petroleum Council. As one of seven women – out of a total 211 members – on the council, she has a role in advising the US President on energy-related matters. “I became a member because I was a member of WIPP. They helped me get on this board,” she said.

Bringing more women into the industry is something that various companies have tried to address. At GE Oil and Gas, the company hosts camps for girls in several cities. Under this program, a GE location will pair up with a local university to run camps for middle-school girls where they work on STEM-related projects, from designing and formulating a lip gloss to learning about robotics. “These are opportunities where our women’s network is really on the ground teaching young girls who are at the middle school level about the importance of math and science,” Ms Knight said.

Ms Knight stressed that each woman in the industry has the responsibility to work to recruit another woman, who can then recruit yet another woman. The overall global workforce is composed of 51% women, she said, but that ratio is still not reflected in the oil and gas industry. “We need each one of you to reach back and bring up one woman like yourself – at least one – so that we don’t have this challenge 20 years from now; so that we see Board of Directors that look like 51% women; so that we see women in senior leadership jobs that are 50-plus percent women,” Ms Knight said. 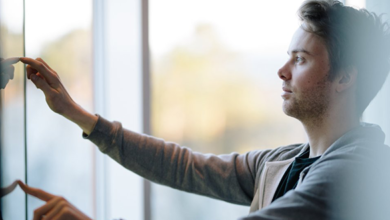