A disruptive technology is one that “gets its start away from the mainstream of a market and, then, as its functionality improves over time, invades the main market,” as defined by Harvard Business School Professor Clayton Christensen. The technology revolutionizes industry structure and competition, while making established technologies or strategies obsolete. “Dual-gradient drilling (DGD) is certainly disruptive, changing the way we design wells, opening many new avenues,” Frédéric Jacquemin, Director DGD Program, Pacific Drilling, said at the 2014 IADC DGD Workshop in Madrid on 7 April. Mr Jacquemin, who currently serves as Chairman of the IADC DGD Subcommittee, described Pacific Drilling’s approach to rig integration for its purpose-built, dual-gradient drillship.

Past generations of rigs have been distinguished by disruptive technologies – from hull design and resistance to harsh environment in fourth-generation rigs to rig floor automation in fifth generations to dual derrick and offline handling in sixth generations. While seventh-generation rigs feature incremental capabilities that are heavier and stronger than previous rigs, those cannot be qualified as disruptive, Mr Jacquemin said. However, the Pacific Santa Ana, which is drilling its maiden DGD well in the Gulf of Mexico, and the Pacific Sharav, which is under construction at the Samsung Heavy Industries shipyard in South Korea, have been redesigned to accommodate the disruptive technology of DGD. They are simultaneously impacting and being impacted by well design, he said.

The original design of the Pacific Santa Ana had two BOP storage areas, but one was converted to a MaxLift Pump (MLP) storage area. “The MLP – about the size of the BOP – was designed to be handled, transported and sea-fastened like a BOP,” Mr Jacquemin said. Under the rig floor, the drilling contractor made room for two additional MUX reels for the MLP and added a multipurpose cart with flexibility to handle the lower BOP, MLP or riser.

The drillship originally had four pumps, but a fifth was added to the pump room and a sixth was added on deck. “Three are dedicated to pump mud, and three are dedicated to pump seawater. The piping had to be significantly revamped,” Mr Jacquemin explained. Now with three fluids onboard – riser fluid, seawater and mud – all three need to be separated and have ways of pumping from different reserves without mixing. “Since the riser fluid needs to be agitated and circulated, we’ve added trip tanks to the riser and now have two for fluid and two for mud.”

Multiple manifolds and more than 200 valves were added to the fluid management system. “One reason is because we didn’t really know what are going to be the requirements once we start drilling dual-gradient wells,” he noted. “We try to accommodate for as many contingencies as possible.” To control those valves, a control panel was added to remotely control both joint valves and pneumatic valves from one panel.

Instead of modifying an existing pump room and adding pumps, the new drillship will have seven pumps between two pump rooms – one room with four pumps for mud and a second room with three pumps dedicated to seawater. “The fluid management system was designed upfront with the right tanks required to accommodate all the different lines required, instead of doing an add-on,” Mr Jacquemin said.

He reminded the audience that, with DGD, integrating new technology is not only about equipment, but it is also about defining new processes and training people. 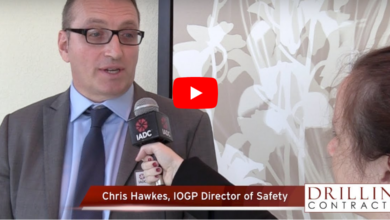 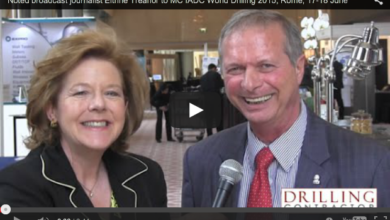