The offshore oil and gas sector will need to embrace both established and emerging emissions reduction technologies to help reach the Paris Agreement climate goals, according to a panel at the 2021 Offshore Technology Conference in Houston on 16 August. “Decarbonization from the offshore industry is already under way and it will only accelerate as technology advances,” said Amy Bowe, Head of Carbon Research for Wood Mackenzie.

While some projects, such as the electrification of Norway’s Johan Sverdrup field, have found success through deployment of a single mitigation technology, she said, “Increasingly we expect best practices emissions management to be defined by a multi-technology approach.”

Ms Bowe spoke as part of the “Focus on the Future: A Global Perspective on Offshore Energy” panel, along with Bill Langin, Senior Vice President, West & Deepwater Exploration for Shell.

Currently, Wood Mackenzie estimates global upstream’s Scope 1 and 2 emissions will grow by about 8% out to 2027, Ms Bowe said, alongside an 8% growth in production. Because deepwater assets are expected to be a primary growth driver for the industry over the coming decade, she noted that “we do expect to see significant growth in absolute emissions from this resource theme. However, those emissions are still growing at a slower pace than production, such that emissions intensity is expected to decline by about 4%.”

The Wood Mackenzie forecast accounts for mitigation measures that have already been implemented or planned but does not speculate about additional mitigation measures that operators might take or adjust for any corporate-level targets, Ms Bowe said. “It’s highly possible that this emissions profile will change as companies continue to adopt targets and execute upon those.”

Ms Bowe identified five technology categories as holding the greatest potential for mitigating offshore emissions: methane leak detection and repair; associated gas monetization; carbon capture, utilization and storage; subsea technologies; and electrification. She cautioned that these approaches are at different stages of maturity and would not apply to every situation. Electrification, for example, still requires major advances in floating wind and other renewable technologies to be more broadly feasible.

Shell not only assumes a price for carbon in its project decisions, but it sees a strong correlation between emissions reduction and shareholder value, Mr Langin said. “If you think about emitting as little methane as possible, capturing every single molecule and reducing energy consumption, all of those are also phenomenal for the bottom line.” As the company learns what works best to reduce energy consumption and efficiency, it incorporates some of those elements into its design standards “so that future projects are even more resilient.”

He described the Gulf of Mexico as a proving ground for new technologies and for the industry-regulator cooperation required to bring transparency to emissions and drive the standards needed to sustain low net-carbon footprint production through the energy transition.

Further, while Shell supports the Paris Agreement, the company also expects hydrocarbons to be part of the energy mix for decades, Mr Langin added. Shell has budgeted $1.5 billion annually for upstream exploration between 2021 and 2025, and it intends to pursue hydrocarbon resources thoughtfully. This means focusing on extending the life of core positions, with an emphasis on deepwater, rather than pursuing new frontier areas.

In addition, Shell is working to develop and supply the world with additional forms of energy. “Let’s make no mistake about it: The world needs more and cleaner energy, and we think that today’s energy system must evolve in order to supply that energy,” he said. 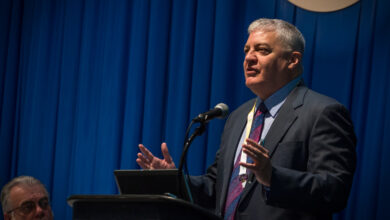 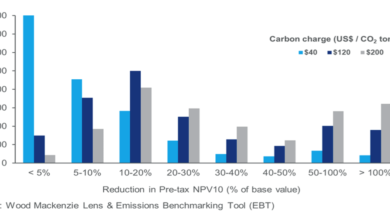