Understanding the risk factors and what are the “unknowns” when drilling in uncharted areas is key to a safe and successful operation. Far north in the Barents Sea, approximately 310 km offshore Norway, OMV drilled the Wisting Central well into a shallow reservoir – only 245 m below the seabed. With very few similar wells drilled in the region, “we didn’t come up with any representative offset wells, and the closest was around 60 km away. We couldn’t use them for the data planning,” Dag H. Breivik, Drilling Manager at OMV, explained in his presentation at IADC World Drilling 2014, held in Vienna in June. The formation integrity was unknown, as was the type of reservoir – oil or gas, or oil and gas.

The PL 537 License in the Barents Sea was awarded in 2009, and “we had to install the work program and finish the first well in 2012,” Mr Breivik said. “This is a story about one well becoming two wells.” OMV used Ocean Rig’s fifth-generation Leiv Eiriksson semisubmersible. The partly winterized, DP class 3 rig was upgraded with anchor winches and had a hull and safety equipment rated to -20°C and drilling equipment rated to -10°C.

The four main objectives were 1) to obtain logs for petrophysical evaluation over the full section, 2) in case of hydrocarbon zones, to acquire additional logs to fully evaluate the reservoir, 3) to obtain PVT samples and 4) to obtain cores.

A slim-well design was considered as an option; it would have used high ECD during cementing because of low clearance between the 11 ¾- and 9 5/8-in. casing and liner to drill to TD. However, “that would have been dealing with a 6-in. hole as the primary design, and we didn’t want to do that,” Mr Breivik said. “In the Barents Sea, you need to expect a lot of oil pressure, and we saw that this design was too light. Ultimately, we adopted the two-well design.”

The two-well design consisted of a 36 x 30-in. conductor and 20 x 9 5/8-in. casing set on top of the reservoir. One of the biggest considerations was well control. “Because the time to react was very short – only three minutes – from the top of the reservoir, drilling with 1,800 liters per minute, we needed to react swiftly,” he stated. “We didn’t want to follow the standard or regular procedures, so we prepared our own well control documents with the drilling school. We also had extra personnel out there, and before we agreed to drill at the reservoir, we invested in a two-day drill-well-on-paper and risk session with key personnel.”

OMV used riserless mud recovery to enhance wellbore quality and abilities for early kick detection. “We did as much as we could to improve on the schematic compressions and cuttings description,” which provided better subsurface understanding, Mr Breivik said.

All four objectives were achieved, and the well resulted in a discovery – 55-m oil column with an overall hydrocarbon column of 95 m (with expected gas at the crest).

The strength of offshore rig dayrates in recent years has attracted significant investment and a spate of orders for newbuilds – particularly for premium jackups, Tom Kellock, Senior Manager – Consulting at IHS, explained at IADC World Drilling 2014 in Vienna last month. Click here to watch this exclusive video with Mr Kellock and learn about his outlook for the global offshore rig market.

The BOP that was intended to shut off the flow of high-pressure oil and gas from the Macondo well in the Gulf of Mexico failed to seal the well because drill pipe buckled for reasons the offshore drilling industry remains largely unaware of, according to a report released in June by the US Chemical Safety Board (CSB). The CSB report concluded that the pipe buckling likely occurred during the first minutes of the blowout. Although other investigations had previously noted that drill pipe in the wellbore was found in a bent or buckled state, this was assumed to have occurred days later, after the blowout was well under way.

IADC is studying the two-volume report but currently sees nothing to cause it to deviate from its intensive program of work to support broad improvements in the drilling industry and in well control, reliability and training standards.

After testing individual components of the BOP and analyzing data from post-accident examinations, the CSB concluded that the BOP’s blind shear ram likely did activate on the night of the accident, days earlier than other investigations found. However, the pipe buckling that likely occurred on the night of 20 April 2010 prevented the blind shear ram from properly functioning. Instead of cleanly cutting and sealing the drill pipe, the shear ram punctured the buckled, off-center pipe, according to the report.

The identification of the new buckling mechanism for the drill pipe -– called effective compression – was a central technical finding of the report. The report concluded that, under certain conditions, the effective compression phenomenon could compromise the proper functioning of other BOPs still deployed around the world in offshore wells. The complete BOP failure scenario is detailed in a new 11-minute computer video animation the CSB developed and released with the report.

The report makes recommendations to the US Bureau of Safety and Environmental Enforcement to require operators to effectively manage technical, operational and organizational safety-critical elements to reduce major accident risk to an acceptably low level. The report also proposes recommendations to the API to revise API Standard 53, Blowout Prevention Equipment Systems for Drilling Wells, calling for critical testing of the redundant control systems within BOP and for new guidance for the effective management of safety-critical elements in general.

“The CSB analysis in Volume 2 is focused on the BOP and the particular technical aspects of the BOPs. Yet, well control in particular, and safe operations in general, are an entire system of technology, people and processes, and thus a systems-based approach is essential for safe operations,” Charlie Williams, Executive Director for the Center for Offshore Safety, said. “The focus cannot be just on the equipment. The report itself notes that many safety system processes were done at Macondo, like hazard analysis, barrier analysis and management of change. Thus, the report should do more to analyze these safety management processes and make recommendations on how they can be enhanced and made more effective. Significant strides of safety are directly related to implementation of a systems-based approach, such as SEMS (Safety and Environment Management Systems) and operationalizing these systems in the field.”

“The CSB’s model differs from other buckling theories that have been presented over the years but for which insufficient supporting evidence has been produced,” according to CSB Investigator Dr Mary Beth Mulcahy, who oversaw the technical analysis. “The CSB’s conclusions are based on real-time pressure data from the Deepwater Horizon and calculations about the behavior of the drill pipe under extreme conditions. The findings reveal that pipe buckling could occur even when a well is shut in and apparently in a safe and stable condition. The pipe buckling – unlikely to be detected by the drilling crew – could render the BOP inoperable in an emergency. This hazard could impact even the best offshore companies, those who are maintaining their blowout preventers and other equipment to a high standard.”

Two more volumes of the CSB’s investigative report are planned to address additional regulatory matters, as well as organizational and human factors. 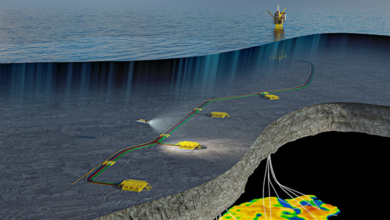