Calgary-based Cenovus Energy, currently field-testing the system at its Christina Lake, Alberta, thermal project, is among the first to deploy the new technology.

“We expect the more robust system to increase run life and minimize operational expenditures,” said Jason Abbate, a production engineer with Cenovus. “Because the ESP system is operated at higher temperatures than conventional systems, we can also expect higher oil production rates.” SAGD production specialists expect an increase in production with a larger steam chamber and less viscous oil at higher steaming temperatures.

The system was developed at the Baker Hughes center in Claremore, Okla., where engineers can test ESP equipment at temperatures up to 300°C (572°F).

Aquaterra Energy is set to produce a high-pressure marine riser system for Apache North Sea that the company says will be a “world first” in terms of connections and its operation. The 10,000-psi rated, full-bore drilling riser system, complete with H4-compatible subsea connector, will be used during Apache’s 2011 drilling program on the Bacchus field in the North Sea. Three subsea wells are planned to be drilled using the Rowan Gorilla VII jackup rig.

A 10,000-psi Merlin connector will be used on the project and is an advance from current full-bore risers, which rely on flanged connections at this pressure. This change to a weld-on premium connector brings 10,000-psi risers in line with other jackup riser systems.

The MZST process can be particularly beneficial for fracturing operations in tight gas, shale gas and coal bed methane wells that target multiple reservoir zones, thick reservoir sections, or long reservoir intervals where multiple stimulation treatments are required. It will enable Calfrac and Canyon to optimize their stimulation operations by combining the deployment of perforating and fracturing equipment simultaneously in the wellbore to enable single-trip, multi-zone stimulations.

The technology significantly increases the number of zones that can be fractured per day compared with conventional fracturing/stimulation operations.

The British government-funded Technology Strategy Board is investing more than £750,000 over three years toward the budget of £1.8 million. The project continues through 2012, with further field trials planned.

The development project encompasses field trial installations, the first of which were successfully completed with first-generation instrumentation on six Statoil offshore wells in April 2010. These six wells already contained Weatherford’s in-well optical sensing systems and comprised of two water injectors, one gas injector, two producers with gas lift valves, and one high-rate Gas Oil Ratio producer. The iDAS technology allows the user to listen to the acoustic field at every point along many kilometers of fiber-optics sensing cable.

Shales still name of the game on US land. In Gulf of Mexico, uncertainty reigns. 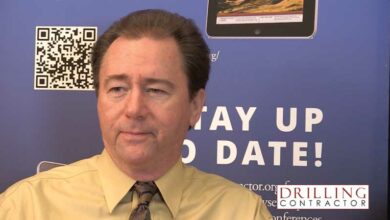