Personnel certification of crane operators has improved safety in the construction industry, and such certification can bring similar results to the oil and gas industry as well, Graham Brent, executive director for the National Commission for the Certification of Crane Operators (NCCCO), said at the 2012 IADC Lifting and Mechanical Handling Conference & Exhibition on 18 July in Lafayette, La.

The NCCCO was established in 1995 by the construction industry to improve lifting safety. The nonprofit group is independently accredited to an ISO standard specifically developed for personnel certification bodies, Mr Brent said.

Certification takes into consideration both written tests and practical testing. “You can only learn so much from a written exam about that person’s knowledge. The ability aspect usually has to be tested in a practical environment,” Mr Brent said. Additionally, all of NCCCO’s certification programs have a five-year retesting requirement. “What we like to see is a continuous testing process. We feel that with something like (crane operator certification), which is a hands-on activity, that testing is important.”

He pointed to a survey of NCCCO certificants showing that 87% believed certification has made them safer operators and 86% stated certification has helped them do their jobs better. “We asked the crane operators what they thought about the program, and it was surprisingly positive considering that this was a brand-new program 15 years ago and wasn’t always met with this kind of enthusiasm.” Participants had an average 30 years of operating experience and had all been recertified multiple times.

The NCCCO has tested more than 120,000 operators, administered over 600,000 tests and certified over 78,000 people in the construction industry. Crane operators can get certified on equipment such as mobile, articulating and overhead cranes. Crane-related certifications are also available for signalpersons, riggers and crane inspectors. “We’ve expanded this to beyond the crane operator,” Mr Brent said. “Clearly this is a team effort, and it’s important for the entire crew all to be competent and qualified.” Certification identification cards are also issued to prove an individual has particular certification designations.

The key to mitigate risk is employing training and certification together, NCCCO believes. “As we discovered in the very early days of the program, people who didn’t get training, who relied just on their experience, did not generally get through the program and get certified,” he said.

The oil and gas industry can replicate the NCCCO’s success, Mr Brent said. “It shows what can be done if the industry gets together and establishes a consensus both in terms of what the context (of the program) should be and how to go about addressing it.” 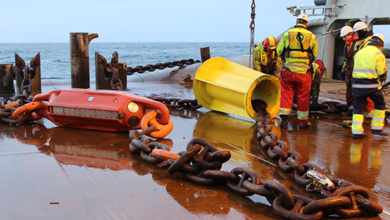 Report: 81% of oil and gas businesses have accelerated or intend to accelerate their deployment of IoT in response to COVID-19