HPHT wells are challenging to drill and, arguably, even more of a problem when it comes to their completion, according to Brian Skeels of FMC Technologies.

In the closing address at the IADC 2010 Well Control Europe 2010 conference & exhibition staged in Aberdeen, Mr Skeels sought to enunciate the scale of the challenges and how reality can differ from anticipation.

“There are a lot of interesting problems and things that we’re solving and we’re actually finding out that some of the problems that we are encompassing are of our own making … we’re kind of overdoing it,” he told delegates.

Mr Skeels, who has been studying the topic closely with his team at FMC, said that it was important to get a grip on some of the approaches used by drillers when successfully drilling HPHT.

“We’re trying to figure out that they did, either blindly or through foresight or whatever, and (in well completion terms) come in behind that to cut down some of the costs that are associated with HPHT.

“When I started out on this project we were getting a lot of different people telling us about a lot of different situations … surface equipment or platforms offshore and what was going on subsea offshore in deep water,” he said. “And a lot of times what we found out, even though they were drilling to roughly the same depth, that thicker salt layers were occurring more in deeper water than in shallow water … it turned out that the salt layer actually reduced some of the pressure and temperature requirements in terms of the completion work.”

Mr Skeels explained that it was easy enough to anticipate bottom pressure versus TVD (total vertical depth) and wells drilled in shallow water versus deepwater were compared.

“They tracked very nicely as far as pressure was concerned. But with temperature we got a big surprise. We thought that the temperature was going to go up right along with the rest, but because of the geology, it didn’t.”

Mr Skeels said that one outcome of the research was that, for deep water, equipment was being designed for a lot higher temperature tolerance than what was really needed.

“We had to go back and redesigned with higher pressure equipment but lower temperatures … which is the easier thing to deal with.”

He asked whether it was possible not to be caught out by surprises, but that it was a tough call.

“When you talk about the reservoir, everybody knows exactly what’s going on with the reservoir, but they haven’t a clue what’s going to happen at the wellhead. The reason is that they don’t yet have an exact understanding on the fluid density or flow rate and so-forth that they anticipate producing.”

Mr Skeels talked of an error band … not much with a shallow well, but which gets wider with depth. With HPHT the band potentially becomes so wide that it is not possible to precisely anticipate what the customer needs in terms of the right completions equipment.

The margin of error grows as distance between the reservoir and wellhead increases; the deeper the well, the greater the uncertainty. And variability in fluid properties and selected flow rates impacts the margin of error.

“Due to these factors, at higher pressures and temperatures, there is more uncertainty regarding wellhead temperature. It’s very critical for HPHT,” added Mr Skeels. 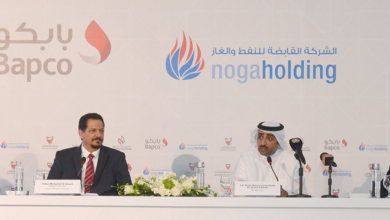 80 billion bbl of oil in place identified in Bahrain