Gagan Singhal, Area Manager at Nabors Drilling International, outlined a new safety intervention system that helps the company to share lessons learned across its global rig fleet at the 2015 IADC HSE&T Asia Pacific Conference in Kuala Lumpur on 12 March. The program has supervisory and senior management participation but begins at ground level, with staff encouraged to intervene when they see dangerous behavior or situations and to start dialogues with colleagues on potential risks. “A peer-to-peer reaction is actually a snowball effect because it affects those around,” Mr Singhal commented.

Tracing the evolution of HSE approaches, Mr Singhal said the 1980s was the “tools phase,” when there was a focus on things like PPE, inspections and maintenance plans. The 1990s was the “rules phase,” with increased performance analysis, refresher training and auditing. This led to the current culture of behavior management and using employee empowerment to stop work when necessary. Although each phase brought about successes in reducing incidents, “we still have accidents,” he said.

The idea behind Nabors’ intervention system is that workers are responsible for each other’s safety and not just their own. It allows all employees to issue a stop-work order if they observe unsafe acts. They are directed to begin a constructive safety dialogue, control the condition or behavior that is causing the risk, involve a supervisor if necessary and document the process on a safety observation card.

The system comes along with safety observation cards that have sections that identify, assess and control risk. The first section deals with the details of what the worker saw happen and their location at the time. The second asks for feedback on what the worker did about it, what the feedback was, what hazards and risks existed as a result of the incident, whether this was to property or people and how bad the consequences could be. The last section asks employees to describe what they did to control the risk and whether this was reported to a supervisor. This last is important because it allows the company to share experience gained by potential incidents. Mr Singhal said keeping and sharing records was key.

“If we don’t record them, we lose the learning, which needs to be spread not just on one rig but several rigs in several countries,” he noted.

Nabors have also developed an iPad app to help with this. Each paper card can be logged offline onboard the rig and stored by supervisors in the tablet device. The data is then uploaded onto a global database on a weekly basis. Mr Singhal explained the safety observation card was also deliberately incorporated into supervisors’ workflows by requiring them to complete a final section, which logs whether the risk is under control and if anything else needs to be done to control the risk. Incidents are discussed at a VP level, as well.

While other safety card systems exist in industry, he said he believes this is the first to add the reporting process into supervisors’ workflows. It is also among the first to incorporate a risk-ranking system, he added.

“Asking people to stop behaviors of others is a culture change,” Mr Singhal noted. “Without the buy-in of employees, this is very difficult to introduce.” Interventions must be made in a constructive way that does not create a negative feeling, he said, and coaching was provided on how to respect local culture and avoid causing offense.

ExxonMobil begins production at Hadrian South in Gulf of Mexico 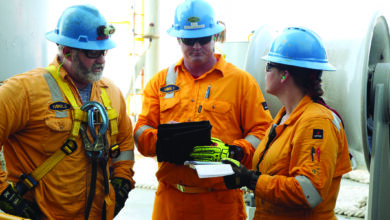