Economic factors drive every aspect of the oil and gas industry. Operators are emphatic about maximizing the production potential of past, present and future wells. The adage of working smarter rather than harder is reflected in the benefits of using a slim-well wellbore design.

Wells that are “slimmed” using solid expandable technology offer savings across the entire drilling process – from increased rate of penetration (ROP) to reduction in tangibles and consumables. Slimmer wells also can significantly reduce the environmental impact of a drilling operation. Additionally, these systems can help operators reach reserves that were previously unattainable.

When the use of a solid expandable system is planned to create a slim-well design, the initial financial impact and well construction phase time can be reduced and the well can become productive more quickly.

The first commercial application of a solid expandable system occurred in 1999. Since that time, installations have become increasingly more challenging – from shallow installations (short 600-ft liners) to the current record of over 6,900 ft of continuously expanded pipe in offshore environments. Additionally, expandables have been run in mud weights above 20 ppg, in wellbores exceeding horizontal deviations of over 100° and in depths in excess of 28,000 ft.

When mitigating geological hazards, solid expandable tubulars provide an alternative to conventional casing design, which may require premature placement of casing points. Solid expandable technology systems not only can mitigate problems as they occur but also provide a response that proactively addresses conditions that pose potential problems.

By definition, a slim-well design uses a strategically planned single solid expandable liner in a wellbore that reduces the wellbore architecture above the expandable liner, while maintaining the original casing design and completion size below the expandable liner. This application is novel in that it rethinks the placement and use of one string of casing to influence the entire wellbore.

The ability to reduce the wellbore architecture above the solid expandable liner while maintaining the original completion size has the notable advantage of drilling a smaller hole at a faster pace. Reducing the required hole size increases ROP, which reduces the number of rig days.

The above criteria have proven to be key elements in a successful slim-well design. However, there are opportunities in environmentally sensitive and remote areas where a slim-well design can reduce a rig’s footprint.

A drilling campaign in the US used a slim-well design and realized a 20% savings on well construction cost. The operator incorporated solid expandable technology into a well-slimming program that reduced upper hole sizes, which improved ROP and reduced overall expenditures.

After installing a 7 5/8-in. intermediate casing string, the next hole section was drilled, and a 6 in.-by-7 5/8 in. solid expandable liner was installed. The expandable liner covered a loss-circulation zone, which enabled the use of a higher-density fluid required to reach the reservoir. A 4 ½-in. production casing that followed the expandable liner’s installation to total depth (TD) facilitated the planned production (Figure 1).

The use of swellable elastomers in lieu of underreaming and cementing further reduced the days-to-depth – US$300,000 in additional savings. The slimmer wellbore’s success prompted the operator to continue the slim-well program, which totaled 47 wells.

Hole instability is common in upper hole sections of the wellbore due to larger-diameter assemblies drilling and/or underreaming through very soft formations. Planning an additional solid expandable liner higher in the primary well design can push the subsequent casing seats deeper and eliminate the need to underream unpredictable lower sections. This improves the odds of reaching total depth (TD) successfully with the desired hole size.

One example of the unpredictability of these large-diameter upper-hole sections is an eight-well project drilled offshore UK. Four of the wells were junked in the 26-in. hole section, representing 21 days of nonproductive time (NPT). This and similarly documented examples warrants an evaluation of utilizing an expandable liner in the upper hole.

While still conceptual, there are two solid expandable options to consider.  The objective of both is to:

• Drill the top hole in a single operation

• Replace 20-in. conventional pipe with a 16-in. expandable liner.

• Provide post-expansion drill ahead with a 17 ½-in. bit.

• Remove need to underream the next hole section below the expandable liner.

In the first example, 20-in. casing is run; it is pre-loaded on the 18 ¾-in. wellhead and hung near the shoe of the 30-in. conductor pipe. The next hole section is drilled to 19 ¾ in. instead of 26 in. The reduced diameter would provide increased hole stability and better hole cleaning due to higher annular velocities. The smaller hole would also have an increased ROP, in some areas potentially resulting in a three-fold increase.

The 16 in.-by-20 in. solid expandable liner would be run and expanded. Because the expanded liner provides a 17.505-in. drift, providing a 17 ½-in. drill ahead, the next hole section would not be underreamed; standard casing (13 3/8 in. to 14 in.) could be run without special connection requirements (Figure 3).

The 16 in.-by-20 in. solid expandable liner (17.505-in. drift, as in Option 1), would be run and expanded. Due to the 17 ½-in. drill ahead, the next hole section would not require underreaming, and standard casing ranging from 13 3/8 in. to 14 in. could be run without special connection requirements (Figure 3). The same advantages are realized in both options.

Solid expandable technology in a slim-well design can add significant value to the overall well economics. That value is directly related to strategic placement of the expandable liner – either higher in the wellbore in offshore projects, or lower in the well design to mitigate difficult formations. In both instances, ROP can be increased, well design can be optimized and a reduction in tangibles and consumables can be realized.

This article is based on a presentation at the IADC World Drilling 2010 Conference & Exhibition, 16-17 June, Budapest, Hungary. 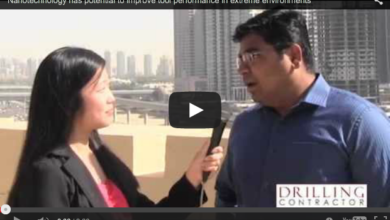 Nanotechnology has potential to improve tool performance in extreme environments