Shell is testing three technologies designed to ensure ongoing process safety by preventing catastrophic incidents, with subsea trials set to begin in key offshore markets such as the US Gulf of Mexico (GOM) later this year. “These technologies are designed to enhance our ability to deal with well control issues,” said Curtis Wilie, Shell’s technology delivery manager, who invented the three systems. All can be activated from the surface or subsurface.

• An emergency separation tool (EST) that is incorporated into the riser package above the blowout preventer (BOP) stack. The device provides a means of severing non-BOP shearable tubulars such as heavy-weight drill pipe, drill collars and large-diameter casings. It allows the sheared tubular to drop below the BOP stack so the BOP blind rams can close;

• A collapsible insert device (CID) that is included in the casing design. The tool is deep set to provide a method of shutting off well flow by pyrotechnically collapsing an insert within the tool downhole in the event of a total BOP malfunction or loss. “This device is designed to either significantly reduce or shut off outflow from the well,” Mr Wilie said. In the event of a well control issue, a tool-pushing device will physically arm the CID from an activation panel to collapse the insert device and reduce the flow; and

• A riser separation tool (RST) that is external to the riser and can sever the riser with a single cut if the hydraulic controls are disconnected. “This tool provides a non-mechanical means of separating any configuration of pipe,” Mr Wilie said.

Subsea field testing of the EST is scheduled to begin in November in the GOM in 6,000 ft to 8,000 ft of water from an anchor-handling vessel to a suction pylon on the sea floor. The tests will include 9-in. drill collar and 16-in. casing. The EST can be activated from the surface with a multiple-key operation in which three keys or switches must be armed before the EST can be fired, thus avoiding accidental firing.

Shell has identified several key areas to conduct final subsea field trials of the CID, which will be placed in the un-cemented portion of the primary protective casing. Target markets for the technology include Alaska, Australia, Norway and the GOM. The CID also is activated from the surface by an encrypted signal.

Field testing of the RST also will commence in November. The device is a retrofit clamp that attaches externally to a riser of any size, type and configuration, just above the subsea stack. It can be manually installed at surface when the riser is run or installed subsea by a remotely operated vehicle, Mr Wilie explained. It contains a number of explosive-shaped charges that individually and circumferentially encompass the main riser as well as the choke, kill and ancillary lines.

“Should it be necessary to sever the riser, the RST is sent a secure encrypted instruction from the surface, and the shaped charges are simultaneously fired,” he said. “The shaped charges focus the cutting energy into a thin, targeted cutting jet that allows the charges to cut through thick-walled and high-yield pipe with ease.” The riser and adjacent lines are completely severed, permanently disconnecting the rig from the riser. 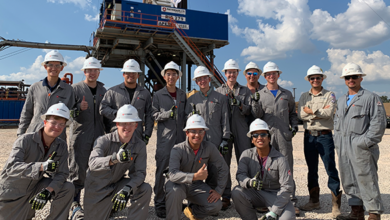