As the world accelerates its path to achieving net-zero goals, it’s becoming clearer than ever that the oil and gas industry will have a critical role to play. Amid this realization, there is also growing optimism that the oil and gas industry is well on its way to developing the technologies and capabilities needed to realize a low-carbon future, according to a panel discussion at the 2022 Offshore Technology Conference (OTC). The session examined the different pathways for companies in the traditional oil and gas space to restructure their businesses so they can better align with the energy transition.

“We’ve never seen such a strong, growing commitment from the oil and gas industry to decarbonize operations. It’s just not well known enough out in the world,” said Amy Chronis, Vice Chairman, US Oil, Gas and Chemicals Lead at Deloitte, at the 3 May OTC session. “We think this commitment’s only going to get stronger due to the improving financial health of the industry and the growing commercialization of green technologies. There’s a lot going on.”

Nabors, for example, is taking a three-step approach to decarbonization, said Guillermo Sierra, VP Strategic Initiatives – Energy Transition. One step deploying technologies to lower emissions of operations, like various energy storage systems and engine management software. The next step is to identify opportunities to apply these solutions beyond drilling to the broader upstream segment and potentially other industries. And finally, Mr Sierra said, Nabors is making investments in adjacent low-carbon segments or technologies. Nabors has invested in four geothermal companies over the past year.

Through its ventures group, the company seeks to create “ecosystems” of complementary clean-energy technologies that can either be used on Nabors’ own operations or that can benefit from the company’s competencies, Mr Sierra said.

“As we think about how to create engine efficiencies, as you think about how to hybridize assets, how to be able to manage energy across an asset base, spending time on energy storage solutions is of paramount importance to us,” he commented. “We can be a customer, we can be a pilot test, we can be something to these guys on the energy storage side for example. Ultimately, the goal is to figure out a way to use who we are today, use our skills, use our engineering capabilities, use our global scale to make investments.”

Schlumberger has been working on optimizing power usage on rigs through its Intelligent Power Management solution, which consists of an automated software program and a battery energy storage system. The software has an adaptive stop/start feature based on rig engine load – when the power demand is low, it diverts excess energy to the battery system, optimizing fuel consumption and reducing emissions.

Paul Sims, VP of Marketing as Schlumberger, said the company is currently working on expanding the system’s capabilities by incorporating alternative fuels, namely hydrogen. The ultimate goal is to replace the diesel generator sets entirely with hydrogen fuel cells, he said, creating a zero-emission drilling solution. However, he acknowledged the challenges in making this a reality.

“We need either a hydrogen supply or the ability to generate power through electrolysis or through steam generation on site. In certain parts of the country, that’s becoming a reality, particularly on the West Coast. There’s already enough hydrogen in the US to power 16,000 drilling rigs, far more than the fleet that’s active, and this will only increase,” Mr Sims said.

Mr Sierra questioned the viability of pure hydrogen-fueled rigs in the foreseeable future, but he said it could “potentially be used to enhance engine performance when combined with diesel.” He also said it would be important to develop low-carbon solutions that do not place additional strain on the environment. While battery energy storage systems provide a short-term solution for reducing emissions, to develop those systems at scale could require large volumes of lithium to be mined. That could introduce further complications, as lithium mining is a source of pollution.

“As we think about energy storage and batteries, we’ve got to be conscious about what we’re doing and what need we’re trying to solve,” he said. “It’s very hard to replace lithium when it comes to a lot of the electronics we use, but on the industrial scale, we’re trying to think outside of the box and look at other things that we could be using to store energy that don’t necessarily require going down the mining path and creating all of these other problems for ourselves and humanity.”

The panelists also discussed how the energy transition will affect workforce development in the near future. Ms Chronis said that building sufficient labor with the skills needed to develop low-carbon solutions will be critical for the oil and gas industry. This means the industry will need to attract new talent from non-traditional backgrounds, such as mathematicians, statisticians, design engineers and environmental advisors. Because these skills are also in high demand by other industries, oil and gas companies will need to better market themselves as offering viable long-term career options.

“The oil and gas industry offers a lot more than just working on a rig,” she said. “We need a lot more skills to enable decarbonization and digitalization across the value chain… but it’s not just in energy where those skills are needed. They’re needed across sectors, so it really comes back to our need to do a much better job of telling the story that this industry can power the future.”

The energy transition is going to play a critical role in recruiting moving forward. Mr Sims said companies that engage in renewables will be better positioned to illustrate their long-term viability to potential recruits.

“I think that some of the new employment possibilities are different,” he said. “We have a lot more partnerships with academia, other industry partners and governments. People can see that they can have a rich career working in a lot of different sectors within the same company, and that’s quite unique as we go into a new energy space.”

KSA project on pace for 2013 completion 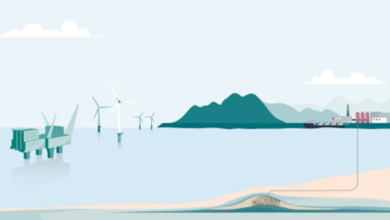