Wintershall recently drilled and completed a multi-fractured horizontal well in the North Sea using an open-hole, multi-stage system. Packers Plus Energy Services provided the StageFRAC Titanium Series system; its use in combination with a large-capacity stimulation vessel was a first in the North Sea.

“We had done extensive research on the various horizontal completions methods that we could have used in our well,” said Mattijs Brugman, well services superintendent for Wintershall. “Packers Plus technology, coupled with a large-capacity stimulation vessel, has substantially enhanced our offshore operations.”

The StageFRAC Titanium Series system is rated for up to 15,000 psi to facilitate aggressive stimulation treatments. The installation took place in the Dutch sector of the Southern North Sea in a military zone, which restricted operations to only a few months of the year. The campaign lasted 19 days, including 10 days waiting on weather. This compares with 32 days in 2007, when Wintershall carried out fracture operations for a similar well – horizontal with five fracture treatments – using the plug and gun method. In that campaign, there was no downtime waiting on weather.

More information about the open-hole multi-stage fracturing system is available at www.packersplus.com. 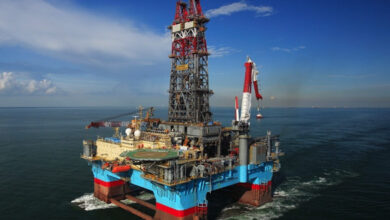