Chevron’s Goran Andersson, chairman of the IADC WellCAP Curriculum Subcommittee, performed the curriculum review. To keep subcommittee members focused, Mr Andersson challenged them with questions such as, “Who is the student? What do we want that student to learn? Does the content represent global well control perspective?”

The most notable changes recommended by the subcommittee are:

• Reorganization of the curriculum document to provide more focus on learning objectives;

• Removal of references to coiled tubing, wireline, snubbing and underbalanced operations as they are covered in separate curriculums; and

• Enhancement of the subsea module.

Equipment topics in the current curriculum were deemed adequate to meet industry’s basic needs. Course duration will not be impacted.

Other changes affecting delivery of WellCAP training were recommended. The subcommittee proposed changing the simulator requirement from a “maximum of 30%” of the course time as stated in the WellCAP Handbook of Accreditation to a “minimum simulation time to be not less than 30% of the course time, not including testing time.” The group also proposed that IADC develop a standard glossary of well control terms to be made available to all accredited training providers.

Public comments have been solicited and will be considered before the recommended changes are submitted to the Well Control Committee.

Future curriculum reviews are planned for the Drilling Fundamental curriculum, the Workover/Completion Fundamental and Supervisor level curriculums, and the Wireline curriculum. During these reviews, emphasis will be placed on inclusion of simulation in curriculums where it hadn’t been required due to a lack of simulator software.

The meeting begins at noon in the Kelanton Room at the Shangri-La Hotel and will adjourn with a discussion of other topics in the Asia Pacific region, including an update of IADC regional activities.

James Sanislow, VP and chief compliance officer for Noble Drilling Services, has succeeded Brady Long, VP and general counsel for Ensco, as chairman of the IADC Ethics Committee. Mr Sanislow will oversee his first meeting as chairman on 30 November at IADC’s Houston office.

Mr Long had chaired the committee since its inception in September 2007.

Drilling contractors, regulators from Norway, Denmark and Holland, and one oil company representative participated in the European Operations Forum (EOF) meeting in Amsterdam in September.

About 120 rigs will enter the market in the coming years, which will require about 12,000 new crew members. Contractors and a training school proposed the creation of a training program – an idea that was passed on to the IADC Training Committee.

Mohamed El Halimi from the Danish Energy Agency (DEA) presented how DEA is studying Macondo reports to ensure lessons are learned, with the objective to improve HSE legislation.

Magne Ognedal of Norway’s Petroleum Safety Authority (PSA) explained that PSA has concluded that there is little need for changes to existing Norwegian regulations.

Members looking to keep up with IADC’s presence in the drilling industry can now go to the latest addition to the revamped iadc.org website – IADC in the News. The new page connects readers to online news articles that pertain to IADC. The page is regularly updated and includes articles from multiple sources.

Editorial: Note to self (US) – Quit shooting at feet

Drilling Ahead: Safety – Collaboration, not confrontation 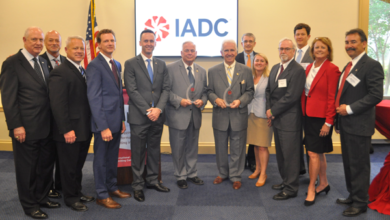