The latest MODU Market Report from Maritime Strategies International (MSI) analyzes the sector’s current malaise and concludes that the OFS supply chain should emulate the consolidation trend in E&P and downstream sectors and seek consolidation as soon as possible in order to secure their long-term future.

M&A activity dwindled in 2020. Amongst the key components of the oil and gas value chain, oilfield services was the segment most acutely impacted, with 28 deals worth just $1.9 billion completed compared with 71 deals worth $21 billion in 2019. That weakness reflected extremely poor market fundamentals and a sector battling poor returns, credit losses and an erosion in mark-to-market valuations.

Since then, the market has entered into the early stages of a recovery. Tendering levels are increasing, and leading edge rates are moving higher, giving rise to hopes that the sector could move toward a period of gradual growth. Nevertheless, its need to adapt to the new reality will continue to shine a light on overcapacity in many areas and a focus on returns on invested capital.

“OFS consolidation looks far more possible and necessary with each passing year,” said Gregory Brown, MSI Associate Director. “Analysts have long called for it, and the sector has responded with a stubborn refusal despite the clear industrial rationale. Discussions take place, but deals rarely come to fruition, almost always getting hung on valuations and the view that stock is grossly undervalued and doesn’t reflect invested capital.”

This position could be applied to about 80-90% of the world’s public OFS companies, as well as the private sector. It is a mindset that has to give way to the broader reality of the need to consolidate in order to survive a market that looks unlikely to recapture the entirety of volumes lost since 2014, according to MSI.

The situation is not unique to drillers or the OFS sectors. The E&P market has long cried out for a similar pooling of assets. The difference now is that such deals are starting to take place. Rather than large cash premiums, stock-for-stock deals at market value have been the winning recipe for the recent spate of E&P deals in the shale patch, the majority of which are considered positive and could be replicated in OFS, the drilling sector included.

“There are two alternatives to corporate consolidation. One is to do nothing and kick the can down the road, hoping that an improvement in market fundamentals will drive a recovery in utilization, earnings and values,” Mr Brown said. “The other is to cherry-pick assets that are stuck in more complicated bankruptcy proceedings and take advantage of distressed values to acquire high quality tonnage at generationally low prices.”

Out of the collapse in demand that followed the first wave of COVID infections, MSI sees a brief opportunity for the sector to rationalize and enable structural change. Bringing at least a portion of those distressed assets into the hands of a well-funded player may be beneficial to an upstream market that is still reliant on the high value, specialized service provided by a vanishing few participants.

Transocean announces contract awards in US Gulf of Mexico 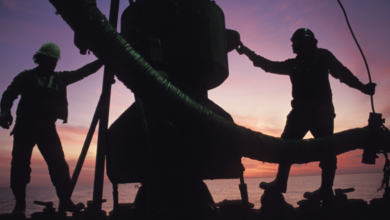