An offshore well in Indonesia’s Ujung Pangkah field went from a potential failure to an invaluable success once managed pressure drilling (MPD) was deployed, said Clifford Lang, drilling and completions manager of Europe, Eurasia and North Africa for Hess. “We surveyed the rig for MPD prior to getting on location … as a precaution,” he said during a presentation at the 2012 SPE/IADC MPD and UBO Conference and Exhibition on 21 March in Milan, Italy.

The first well in the gas-drilling program was completed without losses. However, on the second well, during the drilling of a sidetrack through carbonates in the reservoir section, “we hit the cave,” Mr Lang said. Losses totaling 96,000 bbl were experienced before the company began bullheading seawater with high-viscosity pills to push the gas back into place. The goal was to pull the pipe at least partly out of the hole. “We had to get out of the hole to get MPD in place,” he said.

A second gunk pill that was pumped down at 4,652-ft MD gave the team a chance to get out of the hole. Reduced hydrostatic pressure on top of the gunk pill allowed it to support the fluid above and allowed surface pressure to be bled off to zero.  A 9 5/8-in. drillable subsurface plug was set at 4,325-ft MD, and a cement plug was set on top to secure the well. “That took us 10 days of pain and losses,” Mr Lang said.

Once the team rigged up the MPD equipment and went back in with the drill string, the well reached TD and became Hess’ most productive on the field at 55 million standard cu ft/day. Mr Lang believes that surveying the rig for MPD in advance and having a contract in place with a service company was key to turning the well around when “we were staring at failure in the face.”

MPD has reduced the operational NPT associated with losses in the reservoir section to virtually zero, he added. Hess now makes sure that it has MPD equipment hooked up prior to seeing potential issues drilling through carbonates. Specifically on the Ujung Pangkah field, the company ended up deploying MPD twice out of the first six wells. “(MPD) enables us to do things we wouldn’t have been able to do. It will be used on all future wells and exploration wells in that area. Wherever we have carbonates we will be using this,” Mr Lang said.

Instead of fighting Mother Nature with LCM during loss situations, working with her natural pressure profile through the use of MPD techniques could save significant costs and time. “It will save you a fortune,” Mr Lang stated. “It’s safe, practical and it allows us to do so much more than we expected to do with these wells.”

The essentials of dual-gradient drilling: Several variations under development 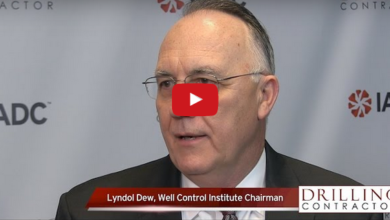