It’s with mixed feelings that I write this column, fondly and sadly bidding farewell to my longtime boss and friend Dr Lee Hunt, while welcoming with cheery anticipation his successor Stephen Colville. Lee has served this industry as IADC president since 1990, and as an IADC staffer for six years prior. I’ve had the honor and pleasure to work with Lee for more than 21 years. (Please see Dr Hunt’s editorial)

I’ve seen many innovations and improvements wrought under his leadership and am proud to have played some small part in them. Under Lee’s stewardship, IADC brought together the most amazing collection of outstanding people I have ever had the privilege to work with. Wow.

But change is the only constant. And IADC will continue to provide “Global Leadership for the Drilling Industry” under IADC’s incoming president, Stephen Colville. Steve comes to IADC from Shell, where he served as vice president of communications. You can read Steve’s full bio on www.iadc.org and his profile article.

Steve will enjoy the opportunity to lead IADC as the industry encounters increasingly interesting times. But remember the apocryphal “old Chinese curse” – “May you live in interesting times!”

Our license to drill

The need to demonstrate that we merit a license to operate stems from Macondo and the consequent avalanche of regulations, many doubtless unnecessary. Still, viewed through the telescope of history, rather than the microscope of current events, we can see that post-Macondo fallout could have been much worse.

Take the 1969 spill in the Santa Barbara Channel offshore California. That platform drilling blowout spilled less than 100,000 bbl (compared with estimated Macondo discharges of 1.6 million bbl to 4 million bbl, depending on who’s counting).

Yet Santa Barbara had a jaw-dropping impact on US offshore drilling. The half-century-old blowout spawned a moratorium on leasing and most drilling offshore California that still stands today. And there is no end in sight. The Santa Barbara spill also precipitated the 1982 moratorium offshore most of the remaining US. Santa Barbara was a major factor in launching the environmental movement, including formation of the US Environmental Protection Agency.

The difference? Today’s US Congress  looks far different from that of yesteryear, given Republican strength. Industry’s congressional friends, Democrat and Republican alike, stood strong for common sense and calm,  despite the post-Macondo political feeding frenzy. Further, even the most obtuse politician recognizes the economic and political consequences of slamming shut the door on drilling in this era of high energy demand.

Finally, and most importantly, IADC and industry vigorously fought the good fight, backed by reason, facts and economic reality.

Offshore aside, land markets have their own licensing challenges, especially when hydraulic fracturing is involved. Despite a wealth of data testifying to the safety of hydraulic fracturing, naysayers abound. (See www.energyindepth.org for the best information.)

Concerns on hydraulic fracturing surface in surprising places. I recently attended a high-level panel on unconventionals in Bangkok at the International Petroleum Technology Conference.  You’d think this a safe bet for a sympathetic audience. Instead, several folks expressed doubts over the safety of hydraulic fracturing.

Our industry, regrettably but consistently, ranks at or near the bottom of the heap in public opinion polls. Overcoming this longtime scourge and sustaining our license to operate is the greatest challenge before us. Drilling a 10-mile ER well is child’s play in comparison. 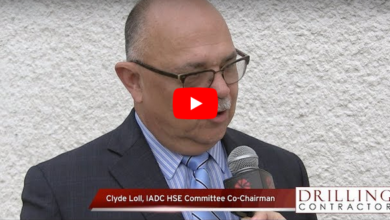