In the “cockpit” of a modern rig, a driller is often surrounded by a slew of incoming data, alarming sounds and, ultimately, an overload of information. In an effort to filter through the numbers and lines, Chevron turned to the aviation industry for inspiration on how to present critical well control information. The result: kick monitoring display (KMD), a program integrated into the rig instrumentation system.

The abundance of information is “a phenomenon that we in the drilling business are facing daily as innovation of technology moves forward,” Goran Andersson, team leader for Chevron’s Drilling & Completion Training Center, stated at the IADC Advanced Rig Technology Conference & Exhibition on 20 September in Houston. “On our newer rigs, we feel that we have so much information available that it becomes hard to really understand what alarms to act on.”

Mr Andersson juxtaposed photos of an old driller’s cabin and a modern-day driller’s chair to illustrate the evolution of a driller’s workstation. “When you start counting buttons that are no longer related to the drilling process, you’ll probably find around 30, 40 different information sources,” he said. “There’s been tremendous advance in terms of getting more and accurate information to the drillers but to the point where maybe it’s overloaded.”

In the balance between quantity and quality, there exists a fine line that separates necessary information from excessive information. “Those of you who have worked in the driller’s position, you set your high and low flow alarms, you set your pit deviation, and that’s about it,” he said. Essentially, the advancements in technology and access to more information created a need for a standard method to identify well control risks, which led to KMD.

Chevron teamed up with Transocean, Schlumberger, Halliburton and National Oilwell Varco and approached the key players – drilling crews – to seek their input on a system that they would be using. “We wanted their input,” Mr Andersson said. “They said, ‘we don’t want any more workload; we have enough already. We don’t want any magic boxes or black boxes.’”

The crews also wanted differentiated alarms “because everything had the same alarm … and they all sounded the same,” he added.

Mr Andersson shared a simulation of the KMD, which automatically pops up on the driller’s screen if triggered by one or more of the three kick indicators: pit volume gain/loss, flow with pumps off and flow increase while drilling. Each indicator is assigned a distinct alarm.

The reduced quantity of information a driller might have to actively monitor is more conducive to human limitations. “If you look at human engineering and how people take on information, we have learned that people typically can’t manage more than six to eight pieces of information (at a time),” Mr Andersson said.

Another element that comes to play is the accuracy of the data provided by sensors. Brought on from an audience member’s question, Mr Andersson explained that sensors did come into consideration but were deemed for a different project. “We had the sensors we had, and we had to expect some false alarms in between, and we are well aware that sensors are a big, big project.” An article about Coriolis sensors, which are increasingly being used to measure drilling fluid density and flow-rate parameters in real time, is featured in the Sept/Oct issue of Drilling Contractor.

Mr Andersson stated that KMD is not proprietary to Chevron, and the company is releasing the program into the field in a phased approach – first incorporating the system and then implementing it on Transocean’s Discoverer Inspiration ultra-deepwater drillship in the Gulf of Mexico (GOM). Chevron plans to apply KMD on all Chevron-operated rigs in the GOM before they take it to other markets such as Brazil.

“We started small, and we sat down and tried to make this to not solve world hunger but to get something valuable for the driller,” Mr Andersson said. “Therefore we stayed simple with the three kick indicators that we typically talk about and teach in well control training.”

DNV GL: Old spending habits may be back 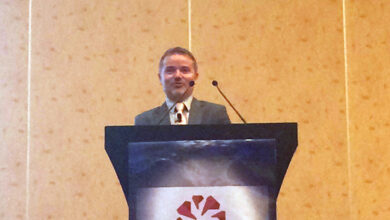