With 18 million acres added to Chevron’s portfolio since 2009, the company has experienced a shift to unconventional plays that, just three years ago, made up only a small percentage of the company’s assets, Kevin Carey, general manager drilling & completions, Chevron Global Upstream and Gas, said at the IADC World Drilling 2012 Conference and Exhibition on 14 June in Barcelona. Beyond the US plays, activity in Europe is growing fast too, particularly in Romania, Poland and Bulgaria, he said.

Chevron currently has 68 rigs drilling in unconventional plays and projects that number to nearly double to 130 by 2017, Mr Carey stated. To match that growing rig count, manpower will have to double as well. The company currently has approximately 2,200 people in the drilling organization, with 350 to 400 dedicated to unconventional resources. The company expects its drilling work force to grow to about 2,900 and double the manpower in unconventionals to 800 by 2017. “To deal with that type of shift in our population, we’ve implemented significant changes in our training program,” Mr Carey said.

Later this year, Chevron expects to launch its first subsea mudlift dual-gradient drilling (DGD) system in the ultra-deep Gulf of Mexico. “We have one ship that is in the GOM, specifically designed to handle DGD equipment,” he said, referring to Pacific Drilling’s Pacific Santa Ana. The technology in effect brings the drilling rig to the sea floor and reduces loss circulation and the amount of pressure on the formation, he explained. DGD eliminates the impact of water depth by replacing the mud in the riser with a seawater-dense fluid and uses a denser mud below the mudline while using the same bottomhole pressure as conventional drilling.

Beyond the immediate benefits of improved drilling performance, wellbore stability and lower costs by reducing the number of casing strings required, Mr Carey said he believes it will take about five years to truly realize the value of DGD. “We will be able to get into reservoirs with much larger-sized holes, much more robust completion equipment, a subsea pumping system, and we feel like it’s going to increase the recovery of the reservoir,” he explained.

In 2010, Chevron acquired the lease to three blocks in the South China Sea, going from no operations in the country to having a drilling program in less than 14 months. Not only did two of the three blocks not have 3D seismic coverage, but the company needed a rig capable of drilling in ultra-deepwaters and with dynamic positioning capabilities. The selection of rig assets in the region that fit the specs was sparse, and complex import/export rules added to equipment challenges. Since there was uncertainty in the well locations and water depth ranges, an excess riser had to be imported.

Due to the time restrictions, the company went with a conventional exploratory casing program (20 x 13⅜ x 9⅝ in.). “We decided we were not going to run any long strings through the (open) reservoirs,” he said, with 9 5/8-in. and an optional 7 5/8-in. string to be designed and set as protection liners.

Chevron’s entrance into China and its growing market in unconventionals offers a glimpse of the company’s portfolio and its future growth. The growth of North American unconventionals “will have a significant impact on our global drilling organization,” Mr Carey said. “The important piece of this and how these shale plays have impacted Chevron is around people and rig utilization.” 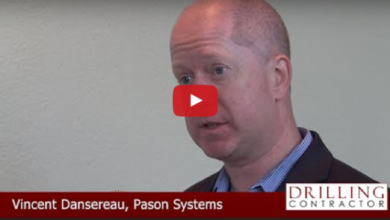