Higher oil prices are contributing to an environment of stability in the Middle East and, in some areas, operators are seeing an increase in rig activity despite the still-slow global economy. With some increase in crude oil demand forecasted for 2011, companies are anticipating ongoing exploration and production in what is being viewed as a relatively steady offshore market and continuing with plans for new rig construction and production facilities.

Bahrain Petroleum (BAPCO) is anticipating oil production from the Bahrain field to increase by approximately 20% in 2011 and to double by 2015, said chief executive Faisal Al Mahroos. “The moderately higher oil prices have helped in continuing and increasing developmental activities for oil reservoirs,” he said. “The gas pricing environment will not impact the rig count in 2011 but can certainly change the gas business environment in the years to come.” Gas is sold in Bahrain at subsidized prices.

Mr Al Mahroos said he expects industry activity in the region next year will spread across the entire spectrum of the oil business. “Specifically, there will be a significant increase in drilling and in adding facilities for increasing oil and gas production,” he said.

He also anticipates increased activities for exploration and for deep-gas production during the next few years despite current market challenges.

He said that although demand for oil is largely governed by the international market, gas demand is driven by the local market, which is continuously increasing.

BAPCO currently has three active rigs in the Bahrain field and plans to utilize an additional two to three rigs during the next two to three years. In addition, offshore exploration wells will be drilled by a contracted jackup rig. “The new rigs that are being deployed are top of the range, characterized by their high efficiency,” Mr Al Mahroos said. “We don’t foresee major changes in rig designs, but we certainly anticipate gaining experience and thus achieving better performances in 2011 and the years ahead.”

Company plans will require a capital expenditure commitment of around $800 million in the upstream business over the next 12 to 18 months, he said, adding that the company is looking to establish an upstream position outside Bahrain.

In terms of technology, Mr Al Mahroos said the company, through a joint operating agreement, will be dealing with a number of issues in the coming years, not the least of which involves doubling oil production in the Bahrain field by developing enhanced and improved oil recovery techniques, such as water flooding, steam injection and gas compression.

“BAPCO is continuing to seek technologies for minimizing the environmental footprint of planned development activities and for producing gas from the deep and tight sandstone and siltstone formations,” Mr Al Mahroos said. ”We want to raise the recovery factor for the field to around 35%.”

Personnel recruitment and training pose concerns too, he said, noting that a large number of the company’s professional staff is expected to retire over the next five years. “Recruitment of professionals, especially fresh Bahraini graduates, is proving difficult, particularly in the technical disciplines,” he said. “Extensive and focused training programs need to be initiated to train starting graduates.” He also cited the need to continue to strive for company and national safety objectives and targets.

Maersk Oil Qatar is continuing to develop oil reservoirs in that country’s Al-Shaheen Field, according to Peter Balslev, head of drilling engineering.

“Our focus is to complete our well drilling campaign of more than 160 horizontal wells associated with the Al Shaheen Field Development Plan 2005,” Mr Balslev said. “We expect to complete this extensive drilling, which has been planned over several years and during which time oil prices have fluctuated, in mid-2011.” Production levels in the field are determined by Maersk’s partner, Qatar Petroleum (QP), in line with global market demand, he added.

While the offshore market in some regions is currently weak and uncertain, the market in the Middle East appears stable, Mr Balslev continued. He said Maersk Oil Qatar is operating four offshore jackups, and the company is discussing potential future work with QP.

“Our main focus is to contract rigs suitable for our working environment with the sufficient capacity to drill long, horizontal wells,” Mr Balslev noted. “As part of our technical evaluations of rigs, we will, of course, evaluate any new designs that could be beneficial to our operations.”

He said the company’s primary technical challenge in the near term is the installation of smart multiple-zone completion systems, such as enhanced zonal isolation of reservoirs, that will optimize reservoir management and production. “We have developed and improved our capabilities in drilling very long horizontal wells from a cost-effective perspective,” he said. “Now we aim at completing them to cover the full reservoir.

“It is always a challenge to drill long, horizontal wells, thus we are currently conducting another series of training seminars focusing on extended-reach drilling practices for all key personnel within Maersk Oil Qatar and our involved service contractors, as well as the rig contractor’s key personnel,” Mr Balslev added.

The company has also adapted its risk-based process safety program to continually manage HSE issues. “We need to ensure that all personnel working as a team are completely aligned and mutually focused to ensure that we can maintain our HSE performance and efficiency,” he said.

“However, this scenario is changing in the coming years as rig activity is increasing,” Mr Al Suwaidi continued. “In this regard, NDC awarded a contract in 2009 for the manufacture of seven new land rigs. In the third quarter of 2010, NDC also awarded a contract to build two new offshore jackup rigs. Furthermore, tenders have been issued for the construction of additional rigs, as well as upgrading of some existing rigs.”

Some of the key challenges the company faces include the safe induction of new rigs, recruitment of personnel and training and development of greenhands, he noted.

Aramco extends Valaris jackup through the end of 2021

Generations: Meet the Springetts: a father and son in industry 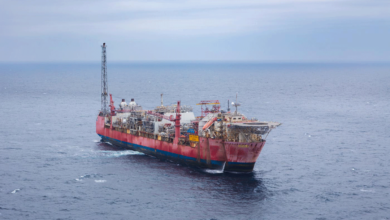