Atwood Oceanics has recently been awarded two contracts for its jackups. A drilling services contract by Glencore Exploration Cameroon Ltd has been secured for the Atwood Aurora jackup. The contract for three wells with a minimum total duration of 200 days will be performed in Cameroon at a dayrate of approximately $155,000. The contract is expected to start in February 2013 in direct continuation of the two well contract with Bowleven PLC.

KCA DEUTAG recently secured its first integrated service contract and a significant award for its mobile offshore drilling fleet. The company’s new contracts in Russia and West Africa are worth more than $80 million USD.

The first contract has been awarded by Sorovskneft for an integrated well construction service for 15 wells in Western Siberia. In addition to the provision of drilling operations and rig maintenance, KCA DEUTAG will deliver all other well construction related services, such as mud engineering, cementing, completion and testing, together with directional drilling and logging.

The second contract is with CNR International (Cote d’Ivoire) SARL, for KCA DEUTAG’s self-erect tender barge, the Glen Esk, on CNR’s Espoir Phase III project in the Cote d’Ivoire. The primary contract is for the drilling of eight development wells with the option to extend for up to eight more wells. The primary period of the contract is expected to take 18 months. The Glen Esk will mobilize from Singapore in mid-2012 and will arrive on location to commence operations in October.

Noble Corp has entered into a three-year term drilling contract with Anadarko Petroleum Corp for the Noble Bob Douglas, one of Noble’s new ultra-deepwater drillships currently under construction at the Hyundai Heavy Industries Co Ltd shipyard in Ulsan, South Korea. The drillship, which is being constructed on a fixed-price basis, is expected to be primarily operated in the Gulf of Mexico.

The Noble Bob Douglas is expected to be delivered in the Q4 2013. The contract is expected to commence following mobilization to an initial operating location and client acceptance. Revenues to be generated over the three-year term are expected to total approximately $677 million. The contract also provides for an operating cost escalation provision. 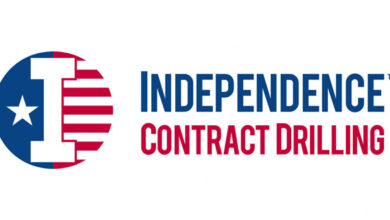