In May 2010, Baker Hughes and Cepsa achieved an expandable liner extension run for a difficult well onshore Egypt, marking the first successful run of the Baker Hughes linEXX system since its inaugural commercial application back in late 2006, for BP in southeast Oklahoma.

Manuel Lapeira, drilling manager for the operator, Cepsa, believes the expandable liner system saved this well. “We would have needed to abandon the well otherwise,” he said.

Cepsa had already encountered severe losses and drilling breaks during the 17 ½-in. and 12 ¼-in. sections of this vertical exploratory well. The drilling breaks were associated with dynamic losses of up to 150 bbl/hr, which the operator fought with up to 130 lb/bbl of lost-circulation material. Caving, sloughing and swelling shale sections were experienced.

Before the 12 ¼-in. open-hole section could be completed, the shales packed off around the drillstring, and part of the BHA was left in the hole with a top of fish at 3,002 m.

The well, planned to 4,600 m, needed to have a 9 5/8-in. casing below 2,950 m in order to achieve exploration objectives. The 9 5/8-in. casing did not make it to bottom, stopping at 2,859 m. This had been anticipated, and Cepsa had planned the Baker Hughes monobore expandable liner as a contingency.

On 19 April, Baker Hughes ran the RC9-R linEXX recess shoe on the 9 5/8-in. casing string as deep as possible. The recess shoe functions just like a normal liner guide shoe except that it provides a recessed ID bore for an expandable liner. It was set above the planned casing depth.

After the recess shoe was drilled out, caving and swelling shale zones, accompanied by high torque, made wellbore conditions in the open-hole section extremely challenging. The 8 ½-in. BHA repeatedly had trouble passing through these zones that had been reamed and back-reamed many times.

On 24 April, the first attempt was made to run in hole with the 8.0-in. OD monobore liner extension. However, well conditions did not allow for getting the liner to depth, and it was pulled out of hole.

After the make/break of the liner, the operator continued to make repeated conditioning trips, using increasing mud weights up to 12.3 lb/gal and reaming/back-reaming. Cepsa also attempted to stabilize the wellbore with an open-hole cementing effort.

At this point, the operator decided to make a second attempt with the expandable liner extension. Although well conditions did not appear favorable – ledges on the hole section and high spikes of torque persisted – there were few choices left other than to abandon the well.

On 6 May, the monobore expandable liner extension system was made up again, run in hole and collet located in the recess shoe profile of the 9 5/8-in. casing. The liner hanger then set and expanded, and the liner expanded from 2,859 m to 2,971 m to the same ID as the casing above. The shoe of the expanded liner was now just above the BHA fish that had been left in the hole previously, but the trouble zones were now isolated. No hole size was lost from the previous casing.

To cement the liner, the composite cement retainer and shifting tool with high-force locating collet would be required to drift through the 9 5/8-in. casing and recess shoe profile, then set the composite cement retainer in the expanded monobore extension. Setting the retainer at depth, then enabling the recess shoe ports on the RC9-R recess shoe above to establish circulation would be required. The collapse pressure rating of the expanded liner during cementing operations was a significant concern. The wellbore had repeatedly shown propensity to fall, and pack-off would be probable.

The retainer was run to depth and set successfully, and the expanded liner was successfully pressure-tested to 1,000 psi.

The recess shoe ports were enabled successfully, and initial circulation was established. Following initial circulation, the wellbore did pack off and build pressure, preventing full annular cement. The ports were then closed, pressure inside the casing was applied, and 15 bbl of cement were squeezed into the hole.

The 8 ½-in. open-hole section was drilled out of the expanded liner to 3,890 m. On 25 May, the open hole was being logged without problems before running the 7.0-in. casing prior to entering the reservoir.

Carl Stockmeyer, Baker Hughes global senior applications adviser, said he hopes that this successful deployment in Egypt will help operators worldwide to actively think about “planning expandable liner systems as a primary well design before drilling begins, rather than as a contingency option.”

Waiting to use the system as a last measure will only minimize the chances for success, he said. “You have all the NPT and costs already, plus you’re degrading the wellbore conditions.”

Chances for success would be much higher if the system was used on Day One, saving time and money.

Mr Stockmeyer also hopes this success will give operators more confidence to try expandable technology. He added that Baker Hughes is working with several operators to plan the deployment of the expandable liner system on more wells, including on offshore wells. 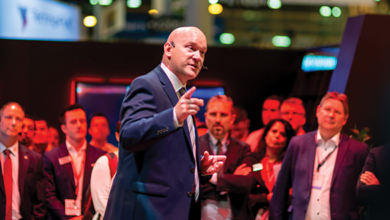